WOW! The 4th Annual 1 More Win golf tournament at The Crossings was a massive WIN this year!!   Jesse Lozano and his charity raised over $18,000 for under served high school athletes in San Diego County. 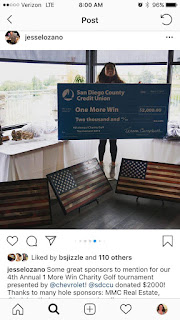 Jesse, Delana, and the whole 1 More Win Charity want to say a special thank you to our sponsors Chevy and  San Diego County Credit Union who came through huge for us! Chevy donated $5,000 and sponsored the longest drive holes, we also were happy to have the Traverse & Equinox on display as well.   SDCCU stood out with a $2,000 donation in addition to all kinds of schwag for the players and rolled out their cash cube on the 14th hole! San Diego Aviators were a great partner at the start hooking people up with tickets to their matches. At the end of the  tournament the San Diego Padres provided  tickets to the winners of the longest drive competition. Also want to say thank you to some of our other sponsors  MMC Real estate, Ranch Catering, youramericanflagstore.com, Resurrection Plumbing,  Full Swing Golf simulators, Myers Family Meats, and Iconic Protein Drinks

Also want say thank you to all of the volunteers which included included some of our awesome STAR 94.1 listeners that wanted to be involved but the stand out was Delana who reached out to Bruce at Valley View Casino, he provided a real black jack table for her to hustle the golfers raising over $750 on her own! 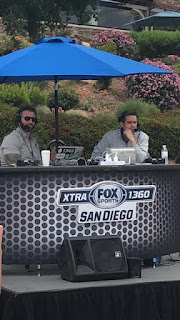 With over 100 players including Eddie & Thor from Rock 1053 along with former Padre Kevin Correia , who won the celebrity division, Jamin' 95-7's Frankie V. brought Jacob Underwoord from O-Town, XTRA Sports was represented by Bill Lennert, Brian Long, and Kyle Englehart along with Nick Hardwick & John Schaeffer who broadcasted LIVE from the event.  Former Padre Aaron Harang and the whole crew from Fox 5 were even apart of the day.

We're already looking forward to you, your clients, and friends of Jesse Lozano in the Morning to join us for our 5th annual tournament next year, be ready to mark your calendars!