ENTERCOM NAMES JOHN KENTERA AS MIDDAY HOST FOR 97.3 THE FAN

PHILADELPHIA, PA – June 27, 2019 – Entercom, a leading media and entertainment company and the unrivaled leader in sports radio, today announced “Coach” John Kentera as the new midday host for 97.3 The Fan (KWFN-FM), San Diego’s Only 24/7, All-Sports FM Station and the flagship station of the San Diego Padres. Coach Kentera will be on air weekdays from 12:00 p.m. to 3:00 p.m. PT, effective July 1. 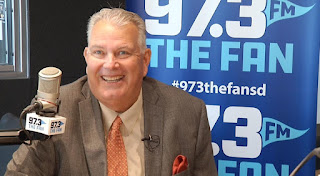 “After over thirty years in the radio business, I look forward to being a full-time member of the 97.3 The Fan team,” said Coach Kentera. “It will be a pleasure to contribute to the continued success of this station alongside an extremely professional group that has the utmost desire to bring top notch sports talk to the beautiful city of San Diego and its loyal fans.”

Kentera, known as “Coach,” has been on the air in San Diego since 1987. In addition to middays, Kentera will continue to host 97.3 The Fan’s pre- and postgame shows for Padres baseball games, “The Fan’s High School Football Show” on Thursday nights in the fall, and serve as the color commentator on “The Fan’s Friday Night High School Football Game of the Week” broadcast. Prior to joining Entercom, Kentera held various roles for XEPRS-AM in San Diego from 2003 to 2015.

Listeners can tune in to 97.3 The Fan (KWFN-FM) in San Diego on air, as well as nationwide on the RADIO.COM app and website. Fans can also connect with the station on social media via Twitter, Facebook, and Instagram.

97.3 The Fan is a RADIO.COM station. RADIO.COM, the fastest growing digital audio app in the United States and the current leader in local sports coverage, has over 300 stations and 3,000 podcasts. RADIO.COM is a part of Entercom.

alraba said…
Sorry but never been a Coach fan, wish they would work something out with Darren Smith. Oh well
June 28, 2019 at 5:15 AM