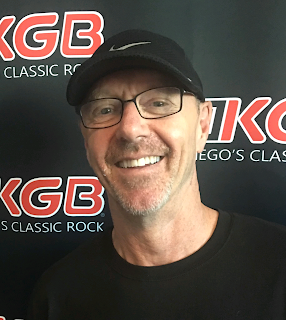 CCR: Joe, before we begin, I just want to express my gratitude for the efforts you've put in over the years keeping the San Diego radio community updated via this website. I'm quite sure I speak for all of us when I say you've been a tireless champion for our community and we could never thank you enough. You're also wonderful company when we're lucky enough to see you out and about. Fire away.

JN: Cookie, my pleasure. You are a San Diego radio legend. Thanks for taking the time for our conversation.

JN: What is your current position?
CCR: I’m on my back looking up at my cell phone typing this answer. A minute ago my left leg was crossed over my right, but now they’re side-by-side. It’s better that way ergonomically—so I’m told—even though now I’m positioned like a corpse. A corpse typing on a cell phone. Thank you for asking.

JN: Do you have anything you’d like to talk about? Such as stories from radio?
Not really. I did enough talking at a party last night and spent the entire drive home reviewing all the things I wish I hadn’t said.

JN: San Diego… What is your favorite place to visit?
Mmm. It looks like you’re asking San Diego that question. I think San Diego can only visit itself, which is a coincidence, because some of my favorite places to visit are on myself as well.

JN: Is your job still as exciting like it was day one?
CCR: Oh yes, Day One at my first job was spent filling out personnel forms, gathering office supplies, and being introduced to strangers who loved the person I was replacing. So yeah, I guess you could say the goosebumps have never really gone away. 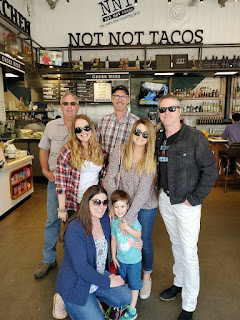 At Sam the Cooking Guy’s NOT NOT TACOS in Little Italy.
(L to R) Boyer, Anna, Emily, Colt, Chainsaw, Sarah, Dave.
JN: What are some facts about you that maybe no one knows, but could be interesting?
CCR: My LDL was a little high this last time. They like it to be <99 and mine was 121, so I need to be more consistent with my Berberine and CoQ10 supplements. That usually does the trick.

Another fact about me (that could be interesting) is the time I stood shoulder-to-shoulder with Tom Hanks at a Broadway theater urinal during intermission, and the poor guy— he couldn’t work up the nerve to say anything. He probably didn’t want to be the hundredth person that day to say “Hey, are you Chainsaw?” I like to think I would have been gracious. Plus it’s never good to turn to the side in those situations.


JN: How do you view radio now, compared to the past, then looking to the future?
CCR: I mostly view the radio on the dashboard of my car, which is so much different now with the digital screen thing and all, whereas it used to be just knobs and buttons. I remember play-by-play guys used to say things like, “The Packers are moving from left to right on your radio dial”, but that doesn’t make sense anymore—unless you’re driving a vintage car or one of Boyer’s 1971 Jeeps. Truth be told, it didn’t make sense back then either—NFL Lilliputians scampering across the dash and we’re all Gullivers at the wheel. Where’s Lombardi? In the vent?

JN: How vital is the connection between an on-air personality and the listener?
CCR: Absolutely vital. The connection between radio performer and radio listener is like no other medium. When you’re driving and listening to your favorite show, those people are your friends going along for the ride—as if they’re actually in the car with you. One time I gave Shotgun Tom Kelly a ride to Studio Diner and now every time “Yackety Yak” comes on, I check the back seat to see if he’s still in there. Kinda weird. Fortunately The Coasters are in low rotation these days, so it doesn’t happen all that often.

JN: What is your favorite movie?
CCR: Gosh, it’s a tough call because the first one is always special, but I believe Police Academy 3: Back in Training (1986) is the high water mark of the oeuvre.

JN: With Social Media being so prevalent, tell me the advantages of using FB, Instagram, Twitter to connect with your listeners
CCR: Well, I’m not quite sure, but if there’s a Rickles clip or something I find amusing, I can count on 40 or 50 people out there to click like, laugh, or love, and that makes me happy. But I better post it early in the day, because I can’t go to sleep until I hit the 40 mark for Facebook likes. Kinda like Zuckerberg clicking refresh a zillion times waiting for that chick to answer him.

Most other radio people are much better at the Social Media game. Little Tommy Sablan once got 800 likes for a Denver Omelette. Not my favorite (the omelette that is, I like Tommy a lot. We share the same studio. He’s a clean man).

Ever noticed we never get status updates on pictures of food? Probably a good thing.

JN: What is your favorite radio moment?
CCR: One of my favorite radio moments was when Penn Gillette was our in-person guest. Right after a sportscast, Penn popped into my studio and said “I’m not a sports fan, but I really enjoyed the way you...” (and then, looking down at the IBM Selectric typewriter I was still using well into the computer age) “YOU IGNORANT F#€&!! How do you even zip up your pants in the morning!?” In a heartbeat, the greatest compliment became the greatest rip.

JN: How long have you been in radio?
CCR: Too long for some, I’d imagine. I earned my first pay check making radio commercials in 1976, and mornings full-time since 1978.

JN: Is there anything in particular you like about the San Diego market vs other markets you’ve worked in?
CCR: Yes, I get to live in this market instead of the others.

JN: What broadcasters do you look up to?
CCR: Bill Walton, although when he’s sitting in that high chair of his, we’re virtually eye-to-eye.

JN: If you could go back in time and work during any era of radio for a few days - which would you choose?
CCR: I would go back to 1985 and stop arguing with Bart Starr about whether the Ice Bowl was played in 1965 or 1967.

I could have sworn...

JN: Is there anything else you’d like to share?
CCR: What a lucky guy I am to be in this town; with my co-workers, bosses, and most importantly, our listeners and clients, without whom none of this would be possible. My gratitude is like the universe. It goes on forever. Oh man, why did I say that? That concept freaks me out. The universe has to stop somewhere, but it can’t. How can there be infinite space??? Aaaaaagghhhh!!!