There is a new morning show in town, and it starts Monday on KyXy.

He was born in San Diego. His dad was in the Navy (his port was in San Diego). Rob’s daughter went to SDSU, his son went to MCRD. His grandparents retired in Lemon Grove. He remembers going to Shelter Island with his dad and eating donuts and watching the sun come up. That’s Rob 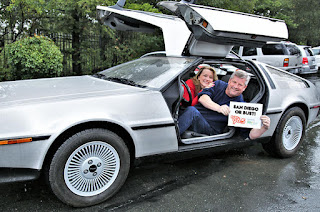 Rob will accuse Joss of being Canadian. She’s NOT Canadian (her parents are)! She was born in the Bay Area. You’ll hear her yell “I was born in Burlingame!”

Joss is a pretty decent cook (she follows a recipe pretty well), loves to read a good book in a hot bath and she’s on the search for San Diego’s best Margarita.

This is the new KyXy morning show. Rob can fly by the seat of his pants, Joss has a bit of trouble “rolling with the punches.” Rob likes to spend money. Joss is a self-proclaimed “tight-wad.” Rob likes dogs, Joss likes cats. They both have a deep love for 80’s music and apparently for “Back to the Future” (as evidenced by the Delorean in the pic).