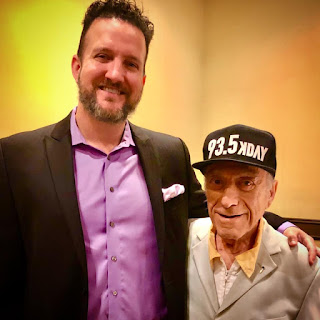 The award celebrates 75 continuous years of staying active in radio broadcasting for Laboe, and recognizes the many achievements over his career. Laboe was one of the first DJs to play Rock N Roll on the West Coast, and one of the first to do dedications on the radio, coining and trademarking the phrase “Oldies but Goodies.”The entire Magic 92.5 on-air staff, including hosts of nationally syndicated shows including Greg Mack, will present the Magic 92.5 Lifetime Achievement Award to Laboe on stage at the “Love Jam” concert, in front of the 6,000+ concert attendees.Magic 92.5 Program Director and afternoon host R Dub! said, “Art Laboe is nothing short of a living legend. Our listeners--and listeners around the world--love, respect and adore him. He’s their ‘Elvis.’ We’re so happy he’s a part of the Magic 92.5 family and we’re looking forward to presenting him with this special award on Saturday.”Laboe’s other awards include a star on the Hollywood Walk of Fame, induction into the National Radio Hall of Fame in 2012, and ‘Art Laboe Day,’ declared by the City of Los Angeles twice, in 1981 and again in 2015.The Art Laboe Sunday Special airs Sunday nights at 8:00pm on Magic 92.5.