KOGO IS 'GOLDEN.' FARRAR AND FINNERTY ROCK THE 'MIKES.'
For the second year in a row, AM 600 KOGO is the only San Diego Radio station to be honored by the Radio and Television News Association of Southern California. KOGO received the coveted Golden Mike Award for coverage during 2018. 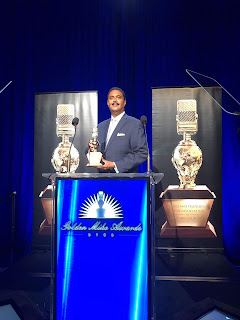 Anchor/Reporter Phil Farrar wrote, conducted interviews, extensively researched, voiced and produced a three-part series during one of the most turbulent years in American history.
KO-GO'S entry was selected as the 'Best Feature News Series Reporting.'

Farrar had an exclusive interview with a local pastor who drove King around when he came to San Diego in 1964. That pastor re-counted what transpired in San Diego that day in April when the civil rights leader was gunned down in Memphis. He also had a sit down talk with a press aide to Kennedy. That aide's territory included San Diego. Kennedy's last campaign stop was San Diego before traveling north on election day. Kennedy won the democratic primary but was shot shortly after midnight on Wednesday. He died the next day at a Los Angeles hospital. 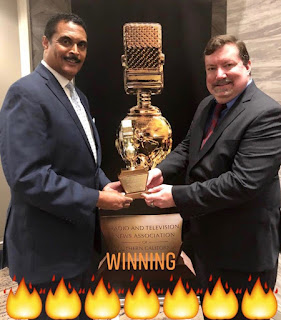 While Farrar used a descriptive narrative of creative words and voiced the story, Finnerty engineered and generated a powerful backdrop -- infusing and blending actual sounds from the battlefield of the beginning of the end of the Vietnam War. On January 31st, 1968, the 'Tet Offensive' exploded. Phil interviewed two men from San Diego who were in the Marines in South Vietnam when the deadly attack began. He also sat down with a noted expert and author on Vietnam who gave him an insight on how the North Vietnamese and the Vietcong blasted their way into key South Vietnamese cities and towns and eventually unified a communist country. It took the United States seven years to pull all of the troops out of the country.

Farrar's main focus was each story had to have a significant and relevant San Diego connection to these historic events.

This is the 4th Golden Mike for Farrar. Finnerty claims his first. The event was held January 19th at the Universal Hilton in Los Angeles where nearly 500 broadcast journalists attended. KOGO was up against stiff competition throughout Southern California.