NEW SHOW - Under the Influence With Josh & Rich

I have had the luxury of listening and reviewing many radio shows over the years. My passion is to keep the radio airwaves open and relevant for everyone, no matter what level of technology that one has available to them. Every so often a new show pops up in my radar that excites me and makes me want to listen to more. 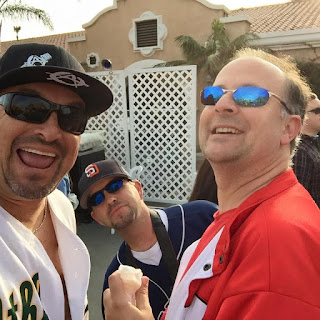 Recently I found a show on Chris Torrick’s Mountain Country 107.9FM called “Under the Influence with Josh and Rich” as being one of these shows. In addition to informative and educational (is that the same thing?). The show is funny and entertaining (that could be the same thing too). With hosts Josh Board (KOGO radio and Fox 5 TV movie critic) and Rich Singley (Former host of Happy Hour San Diego), the show sets out to remind us of great music artists, both current and past, and what were the key aspects and influences to their rise and ultimate stardom.
I listened recently to show about the band Queen and not only did they capture the essence of these great rockers from the 70’s, but they also had some stories and background that I never knew before. (For example, one-time Josh was interviewing a Queen band member for a local radio station around the time that rapper Vanilla Ice sampled a piece of “Another one bites the dust” without permission for his song “Ice Ice Baby” and discovered that the Queen band member had just received $1M in his bank account when they cried foul to the Vanilla Ice legal team).

The show, which is broadcasts from the Excalibur Cigar Lounge in San Diego’s Kearny Mesa area, is tagged as “Two Slightly Immature dudes that smoke premium cigars and discuss various music legends and their influences to success” or something like that. The slightly immature part comes out every so often and it actually makes me laugh out loud more times than not, especially when Josh or their on-air engineer, Big Jonathan Gates (KGB DJ and Dusty Futon podcaster) hammer Rich for his awkward attempt at an Elvis Presley impersonation (“Dude they can’t see your upper lip move on radio”) or they bag on Josh about his self-described, “receding” (“Dude, I love you but you are way more like bald”) hairline. Even when they deviate to childish antics, they quickly bring us back to the topic at hand and play popular or more obscure tunes by the artist/band they are highlighting that week (or tunes by other artists that were influences).

Overall, it’s either a learning experience or a nostalgic one that is fun, easy on the ears and makes you want to light up a cigar and be part of the crew. I actually found myself wanting to hear more Queen songs or whatever band they focused on that week (Pandora should pay these guys a royalty). I can’t wait for more music artists that they bring back to the radio world. You can listen to this show on KRLY 107.9 FM Mountain Country (East County San Diego or via web stream (www.1079fm.country) every Thursday at 7PM PST. Past shows are on Mixcloud.com (search Rich Singley,, the show’s producer). Shows like this keep my radio passion alive. Keep up the good work gentlemen …I mean dudes.