Ted Leitner, Padres radio announcer since 1980, announced Tuesday that he has kidney cancer. Thursday he will have surgery to remove a tumor from one kidney.

Leitner will work Wednesday's game vs the Marlins.

The San Diego Union Tribune's Kevin Acee wrote this article on Ted, and his plan to move forward.


Tony Gwynn Jr. and Jesse Agler will cover for Ted while he is out.

On a personal note, every time I have met Ted, he has been most generous and kind. Here are my girls with him in 2010. 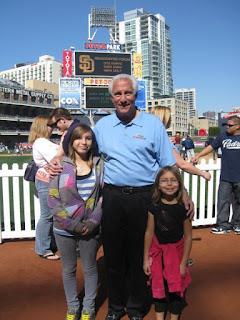