Ben and Woods Debut on The Mighty 1090

XPRS-AM, San Diego’s Sports Leader, The Mighty 1090 AM, is proud to welcome the new morning show of Ben Higgins and Steve Woods to its all-star lineup beginning Tuesday, March 27. 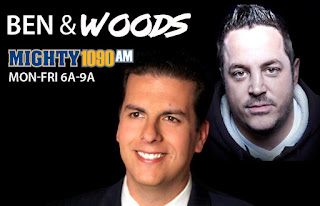 The “Ben and Woods” show, airing 6am9am weekdays, will unite long-time TV and radio sports radio personality Ben Higgins with legendary San Diego morning radio personality Steve Woods for a fun daily three-hour show focusing on sports, as well as other topics that San Diego sports fans care about. As sports director for 10News KGTV-TV (San Diego’s ABC affiliate) since 2002, Higgins anchors nightly sports reports. In addition over the years, he has been a familiar host of several radio talk shows in the San Diego market covering both sports and current events. He also has hosted pre-game and post-game talk shows for Major League Baseball teams.

Higgins graduated from Torrey Pines High School (class of 1993) and began his sports broadcasting career in 1997. The veteran sports reporter has covered the MLB, NFL playoffs, NCAA tournament and made four trips to the Little League World Series. “Don’t forget to mention how I nearly got run over by an SUV on live TV, too,” he said. Ben lives in Encinitas with his wife Sheli, their two sons and two dogs. Woods, a veteran morning radio host with an expansive knowledge of all things radio, has been heard in the San Diego market the past eight years on a number of stations with a variety of music and talk formats.

A passionate sports fan, Steven also loves walks on the beach with his wife Hannah and their screaming son, Beau. He also enjoys playing on adult league softball and baseball teams and helping in the adoption of pets into their forever homes. “These guys really are the Odd Couple of San Diego Radio,” said Mike Shepard, 1090 VP of programming. “It’s supernice straight-arrow Ben along with loud, opinionated and funny Steve Woods.

They really have chemistry and genuinely like each other. It’s going to be fun.” Mike Glickenhaus, President of BCA and Mighty 1090 added, “We are excited to begin this next chapter in mornings on The Mighty 1090 with `Ben and Woods.’ It’s going to be a fun ride with entertaining and compelling sports permeating the airwaves again!” The “Ben and Woods Show” will be joined by Mighty 1090 Executive Producer Joe “Bulldog” Tutino and Producer Paul Reindl.