AJ and Sara on KyXy Mornings 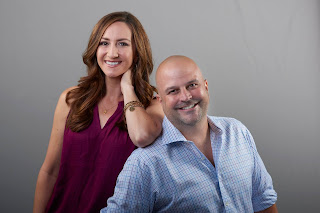 “We’re super excited about this new morning show and have been looking forward to making this announcement,” says Chris Patyk, KyXy 96.5 Program Director. “AJ’s been waking up San Diego for 17 years and counting. The addition of Sara – who has logged nearly the same amount of time on the air – will make the new KyXy morning show an exciting and fresh way for our listeners to start their day.”

Machado commented, "KyXy has been playing great music for San Diego listeners for decades and I've been waking up San Diegans for years. It was only a matter of time before we ended up together! I'm looking forward to building something fresh, fun and relatable that the audience can wake up to for years to come!"

AJ Machado previously hosted The AJ Show for the past five years on ENERGY 103.7 – sister station to KyXy 96.5. In 2012, Machado was recognized as “San Diego's Celebrity Philanthropist of the Year" by the SD Philanthropy Society for his work to support Rady Children's Hospital via AJ's Kids Fund. For sixteen years, he has headed efforts to provide toys and other essential items to the hospital's young patients through the AJ’s Kids Crane event each November. KyXy 96.5 looks forward to continuing AJ’s community outreach efforts this holiday season.

Sara Perry adds, “For me this is the ultimate radio dream job trifecta: Mornings with AJ on KyXy! We can't wait to wake up with San Diego and hopefully make the drive to work or busy mornings dropping the kids off at school a little brighter!”

Perry was previously Midday personality on San Diego’s KFM-BFM where she began her radio career as an intern with the station 17 years ago.

About KyXy 96.5
Owned and operated by CBS RADIO, KyXy 96.5 (“Kicksy”) is San Diego’s 39-year heritage station, playing Adult Contemporary music and is available on-air, online at KyXy.com and the Radio.com app. KyXy 96.5 is the home of Holiday of Miracles Radiothon, which has raised over one million dollars for Rady Children’s Hospital since 2010. A division of CBS Corporation, CBS RADIO owns and operates 117 radio stations in 26 U.S. markets – including all of the top 10 as ranked by Nielsen Audio – as well as an extensive array of digital assets. For more information on CBS RADIO, please visit www.cbsradio.com.