I received this from Dave Mason, I wanted to share it... 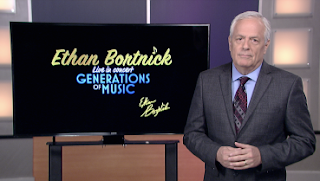 Just wanted to let you know that while I'm on the beach (still), there's no-umm sand growing under my feet.


In June I'll be on NPR Television across the country hosting pledge breaks for "Ethan Bortnick-Generations of Music". At 9 years old, Ethan became the youngest artist to have his own National PBS Concert Special. He's now 17 and just completed another concert special which will be the focus of PBS programming in June across the country.


Recorded at KPBS, the special will feature Ethan and some of the most incredible musical friends who can be found. In the breaks in the show I'll be joined by Kathi Diamant and Maya Trabulsi to tell the story of Ethan, and to tell the story of Public Television and its importance in American Broadcasting.


The show will be available to all PBS affiliates across the country to showcase the talents of this now 17 year old musical genius.


Any mention you can give of this would be most appreciated. Anyone who'd like to reach out to a veteran broadcaster and now national tv host...  davemason858@gmail.com.

DGUAF said…
Dave is a solid pro. One correction here though.There is no NPR TV. NPR is radio and PBS is TV.