LOS ANGELES, CA, April 5, 2017— R Dub!, Director of Programming for Z90 (XHTZ) and Magic 92.5 (XHRM) in San Diego and Creator, Host and Producer of internationally syndicated hit weekend radio show Sunday Night Slow Jams, partnering with non-profit Water 4 Kids International, and listeners, friends and colleagues across the U.S. radio industry, celebrated the delivery of a water well and clean water to Nyakoi Akuoro Village in Northeastern Uganda last week. R Dub!, a world travel enthusiast, returned to Africa on Wednesday, March 30, 2017, and cut the ribbon for the new well on behalf of “Slow Jams 4 Kids”, the global charitable initiative he launched earlier this year. A video of the ribbon-cutting may be viewed at: http://www.slowjams4kids.com/.

“Slow Jams 4 Kids” completed a successful fund drive in just 26 hours after the initiative’s announcement in January, raising $10,500 from listeners, friends and colleagues in radio to provide the village with a water well and clean water for the families there. Construction of the well began shortly thereafter. 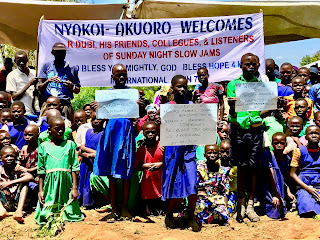 R Dub! was inspired to take action after his first trip to Africa in December. What he saw there was unthinkable: Nyakoi Akuoro Village had no clean source of water, and instead, villagers were forced to walk over a mile to a dirty water source--a disease-infested pit, full of mosquitoes and sickness. The bad water source caused numerous problems, including fights at the source and domestic violence. Its contaminated water (shared by animals) led to diseases including typhoid and cholera. Long lines led to children missing school because they spent half the day fetching water. A young child even fell in and died.

R Dub! recounted: “On March 30th, after traveling over 10,000 miles halfway across the globe, eight hours of driving until the road ended, and then another hour on a dirt trail, the entire village was waiting our arrival to celebrate. I was met with a parade, banners, songs, presentations and speeches. The village's mayor was on hand for the ribbon-cutting ceremony, and I had the honor of pumping the well for the first time as hundreds anxiously stood by with their water cans, ready for their first drink of clean water. They've never had clean water here.”

R Dub! continued: “I got to say a little something before we cut the ribbon and pumped that first bucket of crystal clear, clean water. I explained to the hundreds of villagers (with a translator by my side, of course), that this well came from not me, but from YOU: my friends, family, listeners, clients and colleagues. And that you all send the village your love and blessings from the USA. They cheered so loudly!!! The good folks of Nyakoi Akuoro now have clean water for the first time in their lives. Starting today, they'll never go without clean, fresh drinking water... And the amazing part: it's all because of YOU! Thank you for helping me with this special project and for bringing LIFE to the wonderful people in Nyakoi Akuoro.” 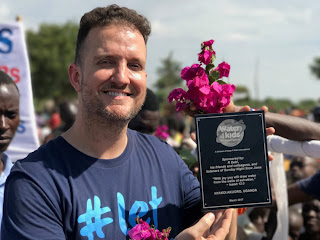 The best news: Slow Jams 4 Kids will fund a new water well every year for needy communities around the world and has already started digging a second well in the Aminit Border village in Uganda. To find out more about the next village that Slow Jams 4 Kids is bringing a well to, and how you can help, please visit www.slowjams4kids.com.