Chris Cantore, recently ousted from FM 949, has landed back on the air. Starting Monday 4-3-17 Cantore will be hosting "The Chris Cantore Show" on The Mighty1090.

The slot was previously occupied by the UT's Kevin Acee and his show "Trending Now".


Now, while you’re saying to yourself, “WTF? AM sports talk?!?!”, a lil backstory :These last couple of months with YEW!, I can’t remember the last time I had this much fun.  In short, I have not been this passionate about something since I first got into radio in 1994 (fresh out of S.D.S.U.) — and, this ride is not stopping, in fact, quite the opposite. 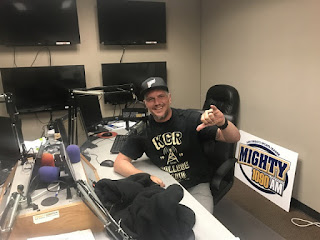 A couple of weeks ago, I got contacted by the Broadcast Company of the Americas, operators of 105.7 MAX FM and The MIGHTY 1090, about a unique on-air opportunity.  Having JUST been interviewed by the San Diego Union-Tribune about making the switch from terrestrial radio to podcasting, the timing was a little awkward, but…
(1)  I am not in a financial position to turn down a job.
(2)  It’s a 100% partnership between Broadcast Company of the Americas + YEW! Media — I am an employee of YEW!, + both companies will share content.
(3)  I have always wanted to try “talk.”
But, sports talk ?  Why not, I surf every day and my kids in little league !
Seriously, with the Chargers leaving town and the Padres jumping to some FM station, the entire medium has been disrupted — the timing is perfect to try something unorthodox.  As fragmented as media is these days, I can host a new show every night and deliver a FULL show to your phone by the next morning for your commute.
Additionally, I look forward to introducing more action sports (surf / snow / skate / MMA) to the 1090 platform, as well as discussions about music, beer, + Mexican food.
When it comes to the X’s and O’s of traditional sports, I am thankful to have a rad network of pro sports bloggers / personalities (@LobShots / @gaslampball / @dallas_mc) within reach along with awesome, knowledgable dudes in house (@johnmgennaro / @619sports.)
Finally, regarding Kevin Acee, former co-worker + the dude who had the gig before me, I have nothing but respect for him + I’d be honored to have him on as a collaborator any time.
thank YEW!chris.
THE CHRIS CANTORE SHOWWeekdays 6 – 9 p.m.The MIGHTY 1090

The Polish Buddha said…
With all due respect to Chris Cantore, this sounds like a really bad idea unless 1090 is secretly heading in a different direction. Truthfully, I wouldn't blame 1090 if that is their end game. Their ratings have not been good, and with San Diego only having one pro sports team now, there's really no need for two full-time sports stations. they could morph into some sort of lifestyle/sports hybrid talk station that carries the Aztec games.
April 4, 2017 at 9:09 AM

gloria said…
Agree with Buddha.. They don't carry Padres anymore, so maybe venture out somewhere else. Maybe say stoned stuff that slackers will laugh to
April 6, 2017 at 1:07 PM