SAN DIEGO, CALIFORNIA – MARCH 9, 2017 – Entercom San Diego today announced the debut of “Dana and Jayson” on KBZT FM 949. The program will air Monday through Friday from 5:30 a.m. to 9:00 a.m. and will be hosted by Dana DiDonato and Jayson Prim. DiDonato, a reformed sorority girl and married mother of 3, and Prim, the gay son of a Baptist preacher, bring their unique relationship as two unlikely best friends to morning drive on San Diego’s number one Alternative station, FM 949. 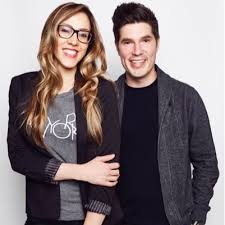 Each show takes listeners on a ride through vulnerable, awkward, and hilarious conversations that would usually be saved for happy hour with your closest friends. “It’s a really exciting day for FM 949 and Entercom San Diego to be able to add such dynamic personalities to San Diego’s Alternative,” said FM 949 Program Director and Entercom San Diego Operations Manager Kevin Callahan, “They made me laugh.

After this many years in radio that’s not easy to do.” DiDonato is one of the few lead female hosts in morning radio. She joins Entercom from WBLI (Nassau/ Suffolk County, New York) where she hosted morning drive for 11 years and won two Gracie Allen Awards. “It’s always been a gift to laugh and hang out with people each morning. We are so excited to invite the San Diego community into our lives, and we hope they make our show a part of theirs,” said DiDonato.

“Thanks to Kevin Callahan, Pat Paxton and everyone at Entercom, your belief in us is humbling. We are so ready to do this.” Prim joins the company from WBLI after co-hosting for 3 years with DiDonato. Prior to joining WBLI, Prim worked as a performance artist in New York City. He is a graduate of the Experimental Theatre Wing at New York University's Tisch School of the Arts. “I’m just happy that instead of talking to myself every morning, I finally get to have human interaction again,” said Prim. For more information about the show or to listen live, please visit www.fm949sd.com.