As many of you already know, Bob O'Connor has passed away. While doing some research I came across the post of Bob's friend  Kenny Weissberg. With Kenny's permission, I wanted to share his words, as I feel they were very poignant.


Many people in the San Diego radio/music community lost a dear friend today with the passing of Bob O’Connor. Long time KiFM program director (before reinventing himself professionally many times during the past two decades), Bob was one of the most optimistic and gregarious people I have ever known. I will never forget him.
Bob O’Connor was one of the first new friends I made shortly after I relocated to San Diego in 1983, switching careers from radio/journalism to become the producer of a fledgling concert series called Humphrey’s Concerts by the Bay. When I made an appointment to introduce myself and pick his brain about the San Diego market, Bob and I hit it off immediately and have been friends ever since. We were both East Coast transplants who shared a passion for music, radio, and sports . . . we never ran out of things to talk about.
During the early years of Humphrey’s, I relied on Bob for countless brainstorming sessions and long lunches to help me “sculpt” a full-fledged concert series. It was a huge boost to me to have the program director of the #1 rated station on my side. When I expressed doubts that Humphrey’s could compete successfully against the bigger, more established concert companies in town, Bob pooh-poohed my negativity and assured me that I could succeed.
Over the course of the next few years, Bob introduced me to every music promo person in LA and connected me to influential managers I might otherwise not have met. Largely due to Bob’s energy and collaborative spirit, I produced concerts by David Sanborn, Kenny G, Spyro Gyra, Lee Ritenour & Dave Grusin, George Benson, Hiroshima, Earl Klugh, Grover Washington Jr., Larry Carlton, Bobby Caldwell, Dave Koz, David Benoit, Acoustic Alchemy, The Rippingtons, Wynton Marsalis, Stanley Jordan, Michael Franks, and countless others. Bob O’Connor and his wonderful staff at KiFM helped put Humphrey’s on the international map.
Even when I switched the direction of the concert series to include rock, blues, folk, comedy, country, and world music . . . which meant deemphasizing smooth jazz . . .Bob was still there for me, always offering encouragement and musical suggestions. He also doubled as my volunteer fashion consultant, insisting that I should have a more diverse wardrobe than jeans and t-shirts when I emceed the Humphrey’s shows. After many lunches at Café Japengo (Bob’s favorite restaurant near the KiFM studios in La Jolla . . . he knew every sushi chef and waitress by name . . .), Bob would drag me to GQ for an upgrade. The purple sports jacket that I wore several times in the late ‘80s is all because of Bob O.
Bob O’Connor also created the opportunity for me to return to my first love of radio. In 1993, KiFM was losing their long time “straight ahead” jazz specialty show host Ron Galon, who was relocating to Atlanta. Bob asked me to replace him, despite the fact that I hadn’t done a radio show in ten years. Not being an “expert” in jazz, I suggested a wide ranging show that incorporated jazz with world music, rock, blues, R&B, and all of the genres influenced by jazz. Bob immediately said, “Let’s go for it” and “Music Without Boundaries” was born.
How many program directors in the constricted world of commercial radio would have taken that chance? One. Bob O’Connor.
In 1996, KiFM was sold, the new owners cleaned house, and Bob was one of the casualties. I left KiFM shortly after Bob did, but I continued hosting/producing “Music Without Boundaries” for 14 years on five different San Diego radio stations. It was a soulful once-a-week endeavor for me and I owe it all to the vision of Bob O’Connor.
Although Bob moved to LA (to work for Norman Lear among other jobs) and we no longer collaborated professionally, we remained fast friends. Whenever I trekked to LA on concert business, Bob and I always made time for lunch at a trendy restaurant of his choice. We shot the shit about Bonnie Raitt’s latest album, the Chargers blowing fourth quarter leads, the Padres’ fire sales after San Diego built them a new stadium, and his love of the L.A. Kings.
I was so happy when Bob moved back to San Diego and reinvented himself as an Apple Certified Professional as well as an audio/visual consultant/installer. He became my go-to-guy for rewiring my media room, upgrading my computers and smart phones, and keeping me up to speed in the world of tech. The only downside was that when Bob would leave our home after six hours of work, all of my Reese’s Peanut Butter Cups were gone, devoured by Bob O!
As Bob has departed on his most adventurous journey, I wanted to express one friend’s love for him . . . and I’m just one of so many whose lives he has made more fulfilling. I will always treasure our 33 years of camaraderie, collaboration and laughter. My heartfelt condolences go out to his mom and his loved ones.
God speed, Bob O! Save me a spicy tuna hand roll on the other side!

Kenny is the author of the award winning memoir "Off My Rocker" which includes several chapters involving San Diego radio. 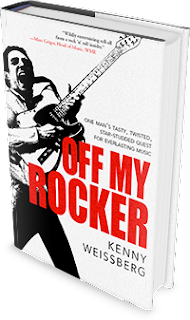 Mark said…
Bob O' was the best. I was better for meeting him, working with him, and I was proud to call him my friend. Mark Z.