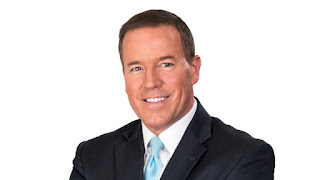 Jason, thanks for your time!

JN: How are things with you right now? Life, work…..
JA: Things are going great right now. My wife and I will be married 10 years next March. We live in La Jolla where my wife has had a Pilates studio for 20 years. Two great dogs and a 1 year old granddaughter who I can’t get enough of. Work is great too as we are just settling in to our new building which is pretty amazing.


JN: Do you have anything you’d like to talk about? Such as stories from TV News?
JA: Right now it’s all about the NFL draft. I’m a football nut, a lifelong Chargers fan and I can’t wait for the season to start. I do a weekly Chargers segment for NBC 7’s “Sportswrap” during the season and it’s still amazing to me that I get to interview players in the locker room after practice. Just great experiences to be able to talk to the players and get insight from them as the season goes on.


JN: Do you have a previous career not associated with TV News?
JA: I quit college after my freshman year and got my first radio job in Montana. Came back to San Diego after a couple of years and got a job as a traffic reporter on the radio. Flew in little airplanes during commute times. That eventually led to a decade in news helicopters as a reporter/photographer. Had the best seat in the house for thousands of San Diego sunrises and sunsets. I’ve seen some pretty remarkable things in this county from the air.

JN: San Diego… What is your favorite place to visit?
JA: For the best views (without a helicopter) definitely the top of Mt. Soledad and the top of Cowles Mountain. Nothing like those sweeping 360 degree views from the highest point of land in the city. Horseshoes beach in La Jolla is my favorite place to spend summer afternoons.

JN: Is your job still as exciting like it was day one?
JA: I wouldn’t use the word exciting, but it’s every bit as enjoyable. I’ve always liked being a part of morning TV. Being there as people are starting their day and, hopefully, helping them feel good about the day ahead.

JN: Where is your favorite place to go out and eat?
JA: Any Persian restaurant. My wife is originally from Iran and I’ve really grown to love both the culture and the food. Bandar in downtown San Diego is a fantastic restaurant for Persian food.


JN: What are some facts about you that maybe no one knows, but could be interesting?
JA: I spent a lot of my childhood growing up on the base that was then N.A.S. Miramar. My dad was a fighter pilot and was the Commanding Officer of one of the early F-14 squadrons. The VF-2 Bountyhunters. Growing up on that flight line was amazing. It’s where I really developed a passion for aviation. As a member of the media I’ve had the opportunity to fly with the Blue Angels on a couple of occasions. I’d do it again in a heartbeat!


JN: How do you view TV News now, compared to the past, then looking to the future?
JA: Knowing all that goes on to put a broadcast together I can appreciate what goes in to the shows. I can tell when a teleprompter fails and I always feel for whoever’s in front of the camera because it’s happened to all of us at some point. But overall I watch the news same as anyone else.


JN: What is your favorite movie?
JA: You gotta give me two answers here. The Godfather and the Godfather part 2. In my mind there’s no way to separate the two.


JN: With Social Media being so prevalent, tell me the advantages of using FB, Instagram, Twitter to connect with your viewers (if it applies to you)
JA: We’re all encouraged to be active on Facebook. I tend to use that more than any of the other platforms. It’s a great way for people in the media to connect with the public.

JN: What is your favorite TV News moment, involving yourself?
JA: So many that happened in the helicopter. To narrow it down to just one, I was on a morning flight over Torrey Pines just kind of shooting the surf right before the anchor tossed to me for my report. As I looked down at my monitor I thought I was seeing things. But I wasn’t. A gray whale had come so close to the beach that it got into the break zone. On that morning, on live TV, viewers got to see a wave break over that whale and nearly beach it. It was that close. Just an amazing moment captured live. I still have that report on tape (this was about the year 2000. Nobody uses tape anymore). The memory is especially sentimental to me because the anchor who tossed to me was the late Larry Himmel who was filling in as the weather anchor that day. We had a great time describing what was happening. I’ll always miss Larry.


JN: Is there anything about San Diego that you may dislike?
JA: I wish it would rain here more.


JN: What is the most interesting job you’ve ever had?
JA: Back when I was a traffic reporter and doing a lot of stand-up comedy I worked as an instructor for the Improv Comedy Club’s traffic school. I met a lot of people who thought they were in for a miserable day. I made sure that didn’t happen. I really enjoyed the 5 years I did it and I think the people who attended the classes enjoyed them too.


JN: What broadcasters do you look up to?
JA: Stephen Colbert and Greg Gutfeld.


JN: If you could go back in time and work during any era of TV News for a few days - which would you choose?
JA: I wouldn’t want to go back. News is about what’s happening now and today we have more resources than ever in history. News traveled more slowly in the past. Today it’s almost instantaneous.

JN: Is there anything else you’d like to share?
JA: Just bought a new pack of gum. Anybody want a piece?