In what is the most exciting promotions I have ever seen in radio, I give you the wrap up of Z90's "Epic 48".

Here is Randy "R Dub!" Williams' description of the events of this past weekend. 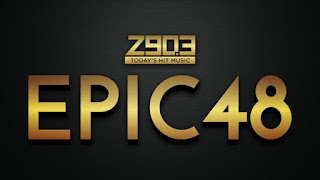 First, five weeks of heavy on-air, online, and televised promotion; and thousands of entries.  All of the entrants had NO IDEA what #EPIC48Hours would consist of—we gave ZERO details except these three rules: 1) Be ready to leave at a moment’s notice, 2) Be ready to go ANYWHERE, 3) Be ready to do ANYTHING.  And one guarantee: THE most #EPIC48Hours of your life. The MYSTERY and SUSPENSE of #EPIC48Hours was unreal.  Everyone was talking about it: clients, listeners, people on the street.
The day finally came. On Friday, we selected a winner and headed to their place of work. Melissa Hill and her guest Jamie of Santee not only had no idea they’d win, but they had no clue what was in store if they won.  Like thousands of others, they came to work with their bags packed and let their boss know that they “may need to take a half day.”
At 12Noon, a luxury Mercedes Sprinter van with Morton in the Morning and our camera crew arrived at Melissa’s work, followed by a convoy of Z90 SUVs, vans, our Z90 MEGA-BUS and staff dressed as secret service, complete with black suits, mirrored glasses and earpieces.
Rick bum rushed the hysterically excited winners inside, and in less than two minutes we were heading North on the 5, destination unknown. The winners had NO idea what was to come…their co-workers still in shock as to what just happened.
Next, we exited the freeway in Anaheim, where we pulled up to the entrance of Disneyland where Melissa and Jamie were handed their personalized monogrammed Mini-Mouse hats and then rushed to the front of the line to experience Star Wars Hyper Space Mountain—no waiting—a true VIP celebrity experience. 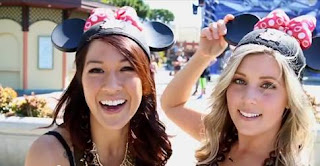 After the ride, it was back in the Mercedes onto the 5 North again, only pulling over to the shoulder to be handed their order of In-N-Out Burger like a BOSS.
Next, the Mercedes pulled into the valet of The Montage Hotel in Beverly Hills, among Rolls Royces and Aston Martins, just long enough for the door to open and Nick Jonas to jump in. When the girls stopped screaming, Nick handed over a wrapped gift box, which contained two personalized Lakers jerseys; then Nick handed the girls his tickets to sit courtside at the game that night.
Next, check-in at the historic Roosevelt Hotel in Hollywood where the girls were presented their corner suite with cocktails waiting in room.
Then, off to Staples Center for entry into the exclusive “Chairman’s Club” to hob-knob with celebrities and some of L.A.s biggest movers and shakers, before enjoying the game from their courtside seats. 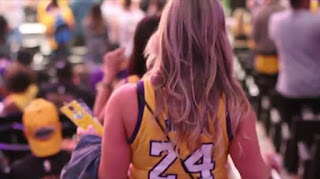 A quick change back at the hotel before being ushered off to dinner at the famous PUMP Restaurant (from TV’sVanderpump Rules), where our winners were seated next to Lisa Vanderpump and Lance Bass from *NSYNC for a delicious meal.
Next, we rolled VIP to OHM Nightclub, situated above The Kodak Theatre in Hollywood for a true VIP club experience, complete with tables and bottle service, where the ladies danced the night away. It was back to the hotel just before sunup to get some rest for what was next.
Awakened at 8AM with breakfast in bed, Melissa and Jamie were off to the airport where things got just a little more EPIC…as they boarded their own private plane and were soon soaring through the clouds to another destination unknown. 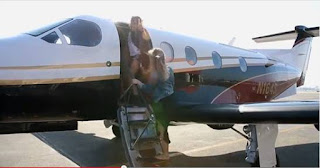 After landing in Vegas, a black car met them to take them to a private recording studio at The Palms, where platinum artistDJ Mustard was waiting to play the girls’ new, never-before-heard tracks from his forthcoming album. Mustard asked the ladies their opinions on the new tracks—which songs should be released and in which order—and signed and presented official DJ Mustard hats for the girls.
Next was a shopping spree at The Forum Shops, accompanied by the winners’ very own private stylist, before heading to their hotel room at Planet Hollywood, where they were already unpacked by our crew, served lunch in the room, and made up by their own private Glam Squad: hair and makeup to take on the night in Vegas.
At 4PM it was another Epic surprise, when the ladies were brought to The Foundry for a VIP private sound check with X-Ambassadors, who, after the performance, hopped off stage to present a signed guitar to Melissa and Jamie. 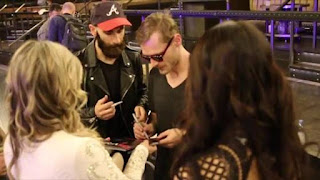 Next stop was to the LINQ hotel where Melissa and Jamie boarded their very own private car on the enormous High RollerFerris wheel for a half-hour ride full of panoramic views of Las Vegas while watching the sun set. 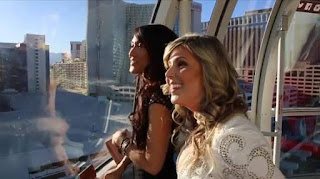 Next, a 5-star dinner in their own private dining room at BLT Steakhouse where they wrapped up dessert just in time to be rushed over to AXIS Theater at Planet Hollywood, where they were taken backstage and asked to knock on a door…and who opened that door? None other than Mr. 305 himself, Pitbull! The ladies hung out with Pitbull in private and enjoyed conversation, jokes, hugs and pictures—and what a surprise when Pitbull pulled a $1000 chip out of his pocket, handed it to Melissa and told her to “bet on black, to match my suit!” 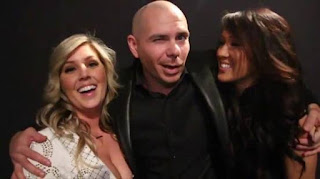 After the ladies said goodbye to Pitbull, it was time to watch his show—from the floor! The energy was full-throttle as Pit delivered his last Vegas show of the year, complete with a full squad of amazing backup dancers, video and confetti cannons.

The night had just begun, as Melissa and Jamie headed to OMNIA at Planet Hollywood, only to be ushered right in, bypassing the entire line of hundreds, and spending the rest of the night dancing and partying like there was no tomorrow.

But there was a tomorrow…and it started with a full body massage session at Spa by Mandara at Planet Hollywood where the ladies were pampered and brought back to life my the talented therapists at Mandara.

A quick bite, and a cruise down the strip to hang out of the sunroof and take in the sun; and then it was off to their private plane again, where they sipped champagne upon arrival back to San Diego.

Every step of the way was carefully choreographed by a team of a dozen runners and assistants, which made for a truly VIP experience for the ladies that money could not buy—aside from the celebrity encounters and luxury treatment, there was never any “waiting,” or standing in line—a crew was always one step ahead of Melissa and Jamie, catering to their every need and want, and our film crew was right there capturing every moment on tape.

You can see the TEASER video below

We’ll have a fully produced, detailed video of #EPIC48Hours next week.

We’ll promote this on air for months to come, and use this example when we are selling the next one on air. Of course the next one will be completely different in every capacity.

A huge thank you to the DOZENS of people who made #EPIC48Hours truly “Epic,” including EVERY department here atSDLocal, our record label partners, and valued clients.  Too many people to thank individually, but each was INSTRUMENTAL in pulling this off.

THIS is how radio is done.