Frankie Returns to Hometown of Boston 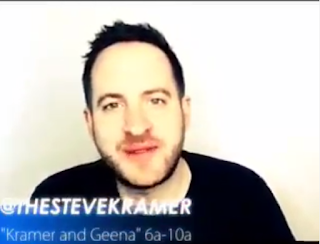 Kramer is a popular morning show personality who has previously entertained audiences in Panama City, Tampa Bay and Phoenix. During the past 10 years, Kramer has produced Top 5 ratings success in every market he worked. "It’s an honor to join Geena on the No. 1 listened to radio station in San Diego,” said Kramer. “I have some big shoes to fill, but with Geena’s help, I hope to come close.”

“Kramer’s personality and experience are a natural fit with our programming line-up,” added Joe Haze, KHTS Program Director. “I’m confident our listeners and advertisers will agree.”

Kramer will replace Frankie V, who recently returned to his hometown of Boston and remains with iHeartMedia as the morning show co-host on WXJM in Boston.

Channel 93.3 is a leading media outlet in the San Diego market and its programming and content are available across multiple platforms, including its broadcast stations; online via its branded digital sites; mobile; and social, with nationwide listening through iHeartRadio — with its more than 700 million downloads, more than 75 million social media followers and 87 million digital uniques across the Network.