Even Mayor Faulconer Weighs in on the Jagger & Kristi Celebration

Kristi tells SanDiegoRadio "When we started out doing a radio show together it never occurred to us we would get a Proclamation from the City.  That happened today and it couldn't be

more special to us that it happened in our tenure at Magic 92.5.  Our Magic listeners are the best and serving them in a community oriented way has always been
our goal."

Mark Jagger:  "Well, this was a surprise!  A huge Thank You to San Diego City Councilman Chris Cate's and his staff for the acknowledgement.  It is truly our pleasure to
work closely with the San Diego community and an honor to accept this Proclamation. "
As Jagger and Kristi relived their radio past Friday, they were joined by San Diego City Council member Chris Cate (District 6) and were presented with a proclamation. 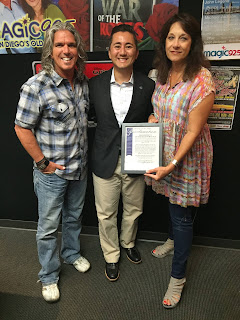 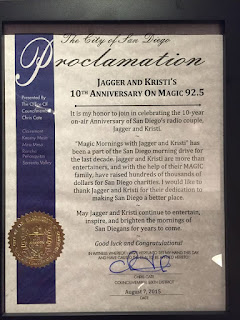 Magic 92.5's PD R-Dub! tells SanDiegoRadio "It's been an absolute pleasure working with Jagger and Kristi and I've been fortunate enough to have experienced the last four years at Magic with them.  Anyone who knows them know that besides being the consummate professionals that they are, that's just the beginning.  Getting to really know Jagger and Kristi, and how much they truly care about our community--from the humans to the animals--has been a fantastic experience.  I continue to learn from them both everyday.  Here's to ten more!"

SanDiegoRadio reached out to San Diego Mayor Kevin Faulconer for his thoughts on this milestone. 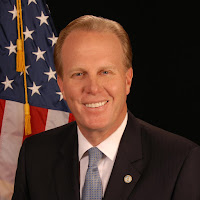 Faulconer is quoted as saying "Jagger and Kristi are San Diego radio icons. They've entertained San Diegans for nearly 20 years with their fast-paced banter, but it is their passion to help others that makes them truly part of the fabric of our community. I want to congratulate the two of them on their 10-year anniversary at Magic 92.5 and wish them all the best."

SanDiegoRadio extends a huge congratulations to you both, and Sammy Jo!