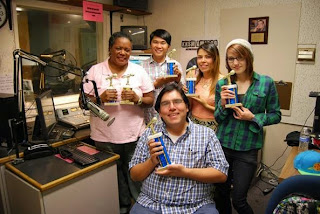 (SAN MARCOS, CA) Palomar College’s radio station, KKSM, is in the groove these days. May 5 was designated as “KKSM Palomar College Radio Day” in San Diego County by the San Diego Board of Supervisors. This honor follows the radio station being named “Best Community College Radio Station” in the nation earlier this spring at the 2015 Intercollegiate Broadcasting System (IBS) Golden Microphone Awards in New York City.
According to Zeb Navarro, KKSM station manager, the Board of Supervisors issued an official proclamation at their meeting on the morning of May 5. Navarro planned to attend along with Jim Odom, Manager of ETV and KKSM Radio Operations.
Palomar College Superintendent/President Bob Deegan said, “We’re very proud of everyone involved with KKSM – our fine instructors, staff, and of course our very talented students.”
In addition to receiving the award for Best Community College Radio Station at the IBS Awards, KKSM also received finalist honors in this national competition in the following categories: Eric Rallos for Best On-Air Personality, Serena Reid forBest Program Director and Best Public Affairs Program, Brianna Harley for Best Liner, Lilly Lopez for Best Specialty Music Show, and Zeb Navarro for Outstanding Advisor. KKSM broadcasts 24/7 on AM-1320, Cox Cable 957, and online atwww.palomarcollegeradio.com.
“This recognition from the Board of Supervisors is a great honor. This, on top of the IBS awards, validates all the hard work and effort our students put in, and the educational direction we pursue at Palomar, preparing students for careers in the broadcast industry.”