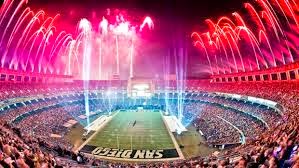 San Diego, CA  – 101.5 KGB FM announced today that its annual SKY SHOW will be a pyro-musical event celebrating rock’s 1964 British Invasion and will feature brand new fireworks and effects that have not been seen in San Diego.  The KGB SKY SHOW will take place this Saturday, November 8, 2014 at Qualcomm Stadium immediately following the San Diego State University Homecoming game against the University of Idaho.  The KGB SKY SHOW is synchronized to a custom soundtrack that can be heard in throughout Qualcomm Stadium, on-air at 101.5 FM, and via live stream at 101kgb.com.
Now in its 39th year, the KGB SKY SHOW is a San Diego tradition that is known for its innovation, and this year is no exception.  What sets SKY SHOW 2015 apart from previous years is the 3-tiered layering approach which will start on the field with thousands of Sousa comets and custom designed mines.  After each scene is introduced with field accents, the action will move to the rim of the stadium and finally up into the night sky.  This design has been in development for the past 3 years and will recreate patterns used traditionally at shows in Malta, the Western Winter Blast and the International Fireworks competition in Montreal. In addition to an unprecedented pyrotechnic experience, the KGB SKY SHOW will include an afternoon of fun and an evening of football.  Guests will be invited to arrive early and enjoy SKY SHOW VILLAGE in sections C1 and D1 of the Qualcomm Stadium parking lot for carnival rides, KGB’s live broadcast and other fun activities before the game begins at 3:30 p.m.
“We are thrilled to introduce some never before seen effects that are just now arriving to U.S. ports. These new effects will be seen for the very first time at SKY SHOW 2015,” said Paul Souza, Pyro Spectaculars By Souza Product Engineer.
Some of the new international aerial effects include the twisted ghost and revolving dragon from China; the Magic Peony and Triple Petal Chrysanthemums from Japan; and the Sangria and Relampagos shells from Spain.   The grand finale will be highlighted by Pyro Spectacular’s signature Nishiki Kamuro with Strobing tendrils and will conclude with a sky full of thunder.
“SKY SHOW always provides a spectacular environment for our fans," said Steve Schnall, SDSU Associate Athletic Director. 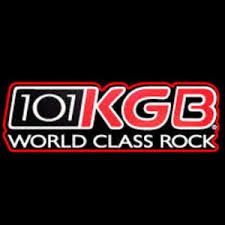