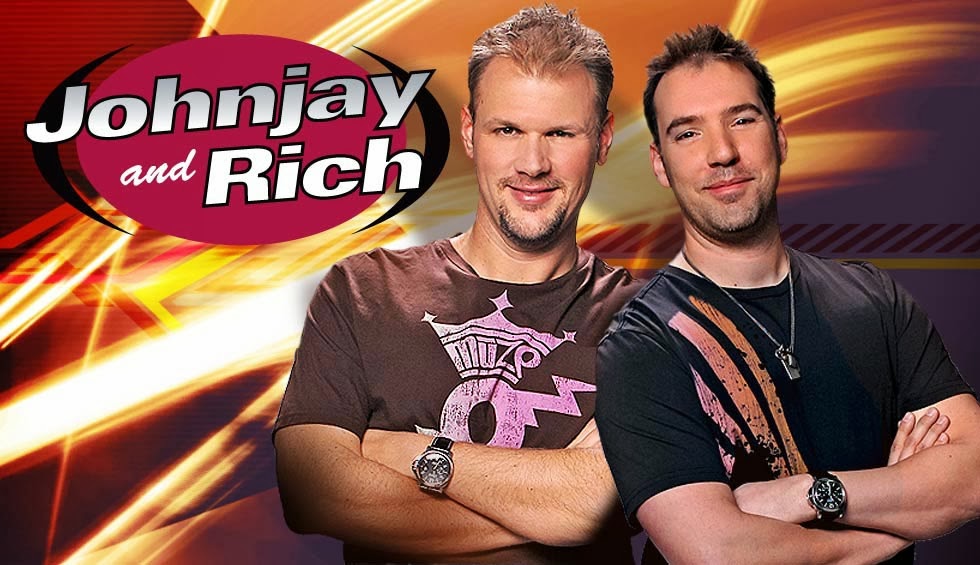 This just in! The Johnjay and Rich Show will be returning to the San Diego airwaves starting Monday, March 17th, hosting afternoon drive on100.7 JACK-FM.  The Legendary DSC Show will continue to lead off the day from 6am-10am, followed by long time JACK-FM personality Sara Perry in mid-days.  The Johnjay and Rich Show will be customized daily, tailored for San Diego with fresh content to complement the best of their daily syndicated show. “Rich and I spent so much time in San Diego and we love it.   We LOVE JACK-FM and LOVE the DSC.  We are ready to get back on in America’s Finest City doing afternoons,” remarks JohnJay Van Es.

Currently The Johnjay and Rich Show originates from Phoenix to 11 U.S. markets, however, JACK-FM will be the first market airing the show in afternoon drive.  Johnjay and Rich both have deep roots in San Diego. “My favorite moment ever in radio just happened last week when Dave Rickards called and welcomed us to JACK-FM,” said Rich Berra.  “I grew up producing for them and there is NO other SHOW in radio that has my respect like Dave’s.  It’s an honor for us to be in the same building as him.  We have to really start getting our act together.” Johnjay started his radio career in San Diego and as stated Rich Berra was the producer on The DSC Show for over ten years before launching his own morning show in Dallas. “Rich and I being back on the same team is a pleasant surprise for both of us,” said Dave Rickards of The DSC Show.   TheJohnjay and Rich Show also aired on KHTS, Channel 93.3, in morning drive for just over a year in 2009-2010 and were top five in major adult and female demos.

Program director Mike O’Reilly said on the addition that “it’s about making 100.7 JACK-FM in San Diego a unique, daily addiction multiple times a day.” Along with Johnjay and Rich, Kyle, Joey Bradfisch, Shannon and Producer Bill round out The Johnjay and Rich Show’s creative, upbeat crew.

“As compelling content continues to drive Radio consumption, we are expanding the unique JACK-FM brand of ‘PLAYING WHAT WE WANT,’ to include a wider variety of entertainment options for the San Diego Radio listener. The addition of The Johnjay and Rich Show to our lineup is a critical piece to that evolution,” said Gina Landau, VP/General Manager of the KFMB Radio Stations.

From #MeanTweets to War of the Roses to interviewing today’s hottest stars such as One Direction, Katy Perry, Bruno Mars and more, The Johnjay and Rich Show will be bringing quality entertainment and star power to America’s Finest City. EVP of partnerships for Paul Anderson Media Agent, Inc. Mark Kopelman added, “From the moment we began working with KFMB they stood out as a first-class organization and a station that would support and continue to help the JJ&R's network grow. We could not have picked a better partner to bring JJ&R back to San Diego…Simply put…They Get It."

To learn more about The Johnjay and Rich Show, please visit www.sandiegojack.com.