SanDiegoRadio Spends a Day With SD 6 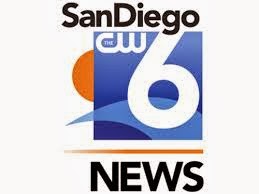 As I sometimes delve into TV news for the column, I was thinking it may be interesting to see how a TVnews story is assembled, SanDiegoRadio spent Sunday with SD6 reporter Gary Buzel as he covered the final push for votes in the campaign for the next mayor of San Diego. The special election is this Tuesday. At the time of this posting, there was only a one point separation between the two candidates, with Faulconer in the lead.

Sunday afternoon, I met up with Gary just as he was leaving the station, he packed up the news truck with his equipment and we headed to our first location of the day.

Location #1: David Alvarez Campaign Headquarters
As we arrived, volunteers were seen loading their cars with Alvarez yard signs by the dozens. We headed upstairs and found the call center. Approximately 20 volunteers were manning the phones, drumming up support for their chosen future hopeful. I heard both English and Spanish on the phones talking to the voters. 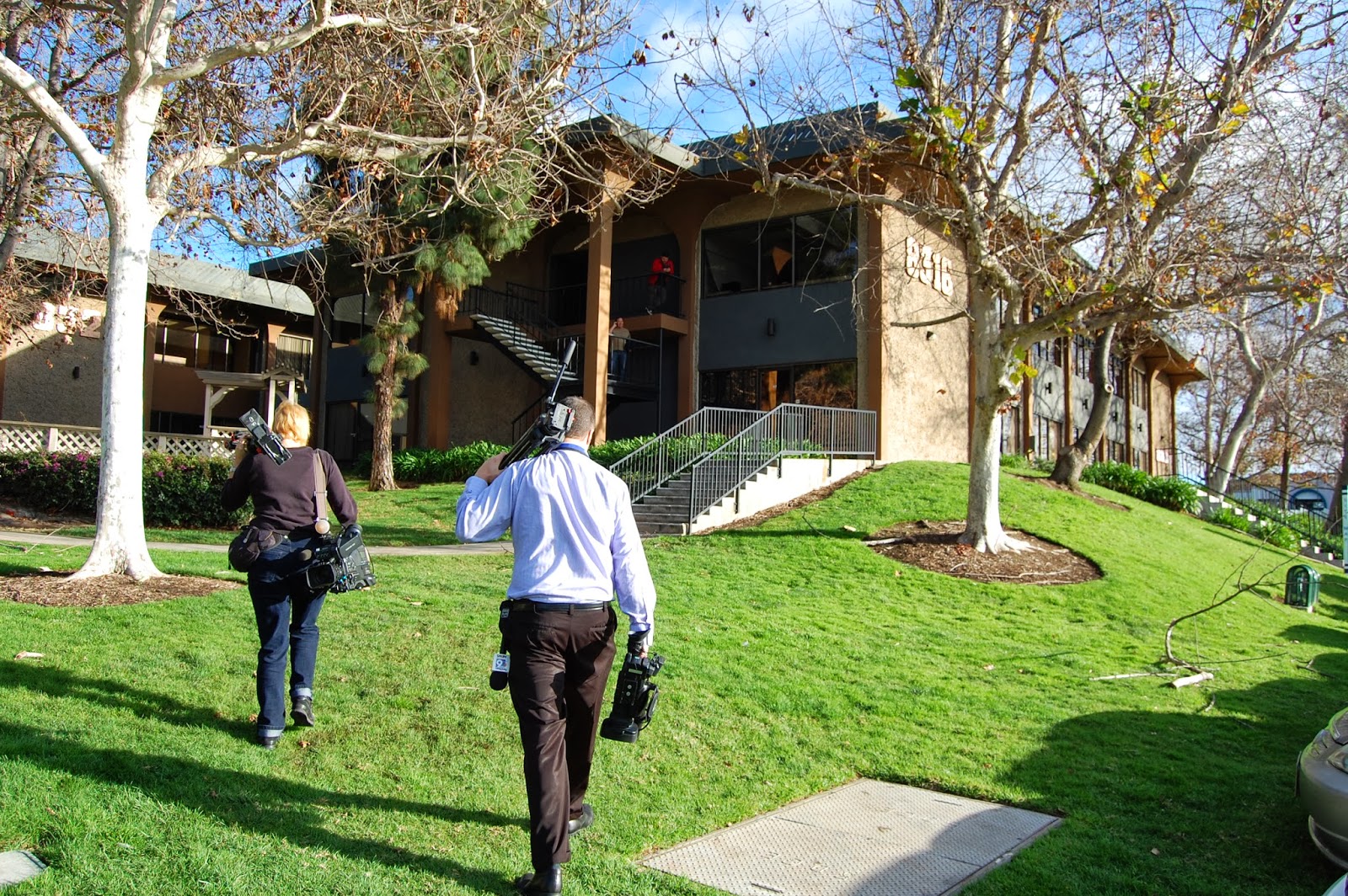 David Alvarez, fresh off of receiving an endorsement from President Obama on Saturday, entered the room, dressed in a three piece suit and sporting a City Council pin. Alvarez shook our hands and made his way to the volunteer tables, patting them on the backs thanking them for their hard work and time. 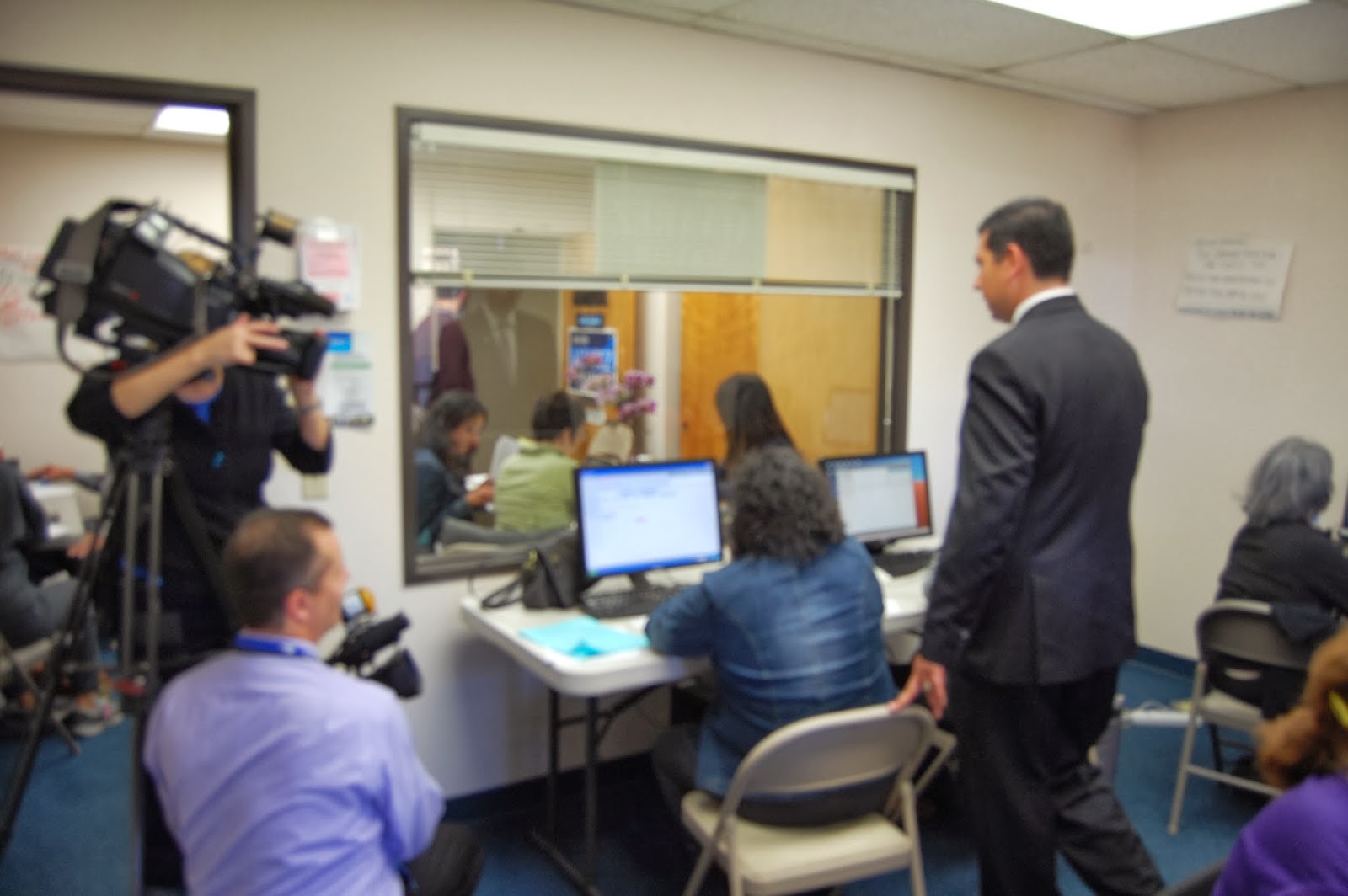 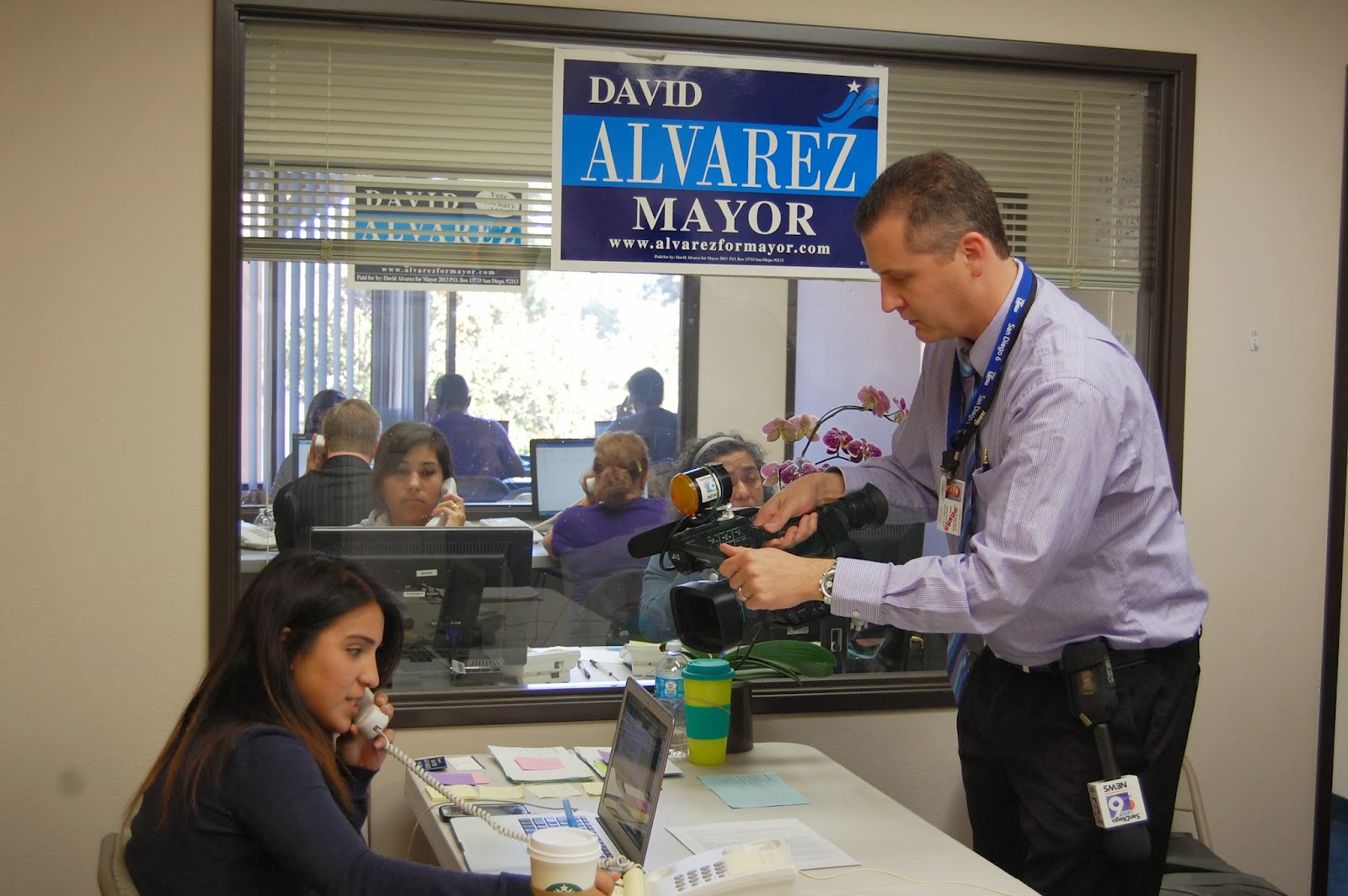 Gary had his camera set and it was time for the interview. 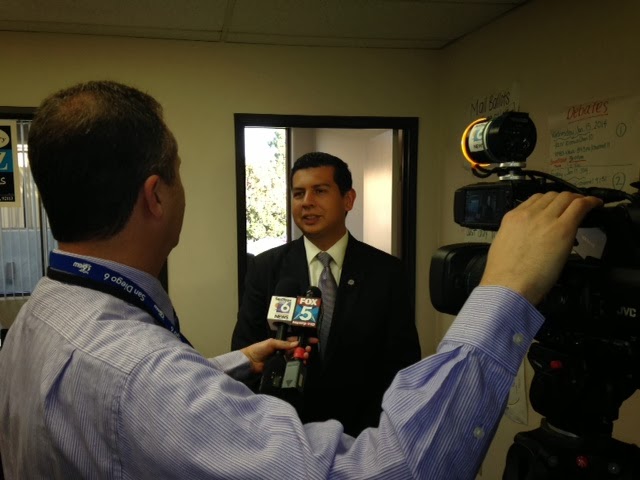 After a few quick questions, Alvarez moved to a phone and made a call to a voter, personally asking for a vote. I could not hear the other end obviously, but he seemed pleased with the call. 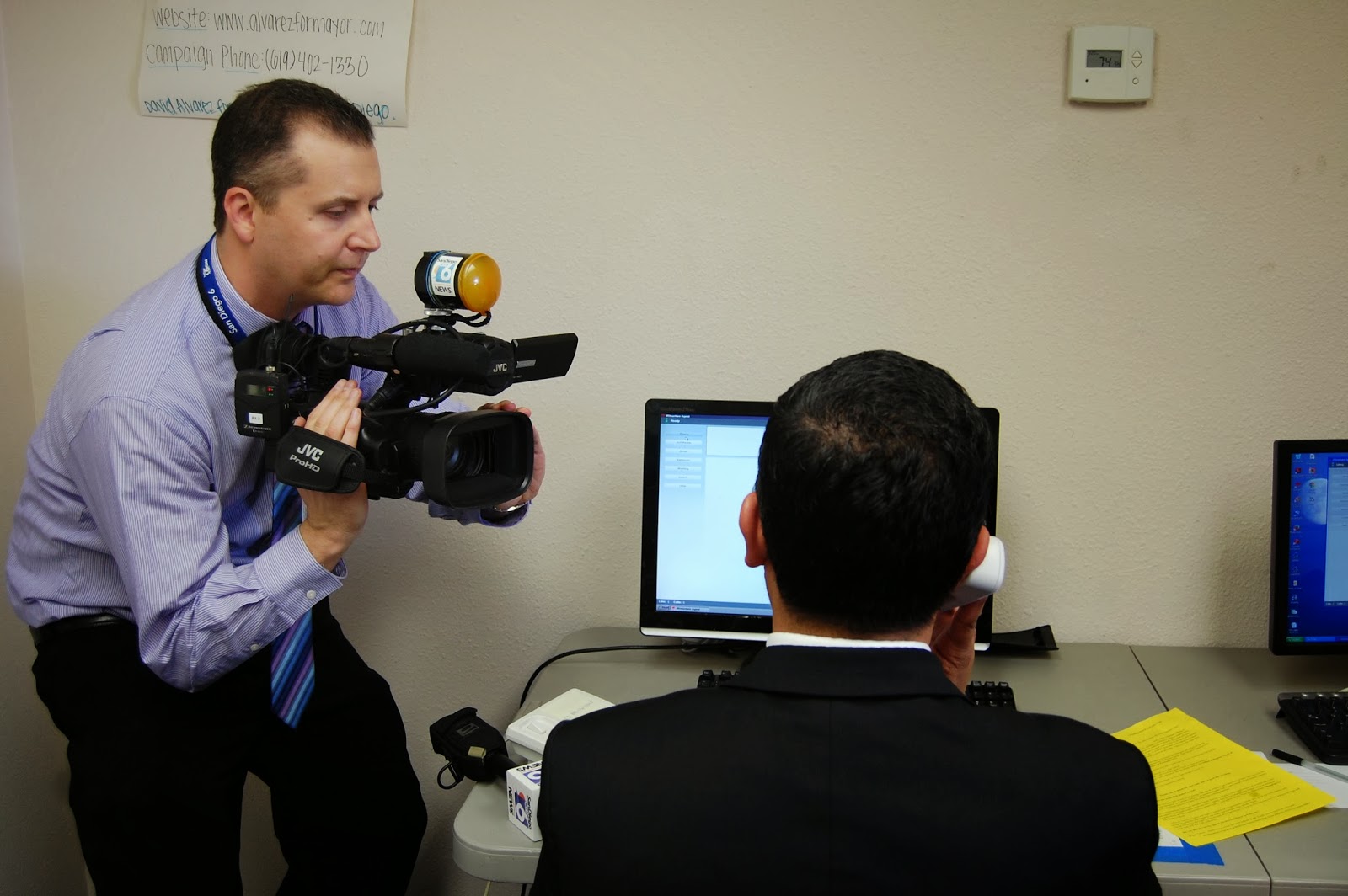 I had a chance to meet David and I got a photo with him,  and was handed a David Alvarez election button.

Gary grabbed some footage "B Roll" of the volunteers and we were finished there.

Location #2: Kevin Faulconer Fundraiser
This was a bit more formal than the Alvarez camp. Held in the back yard of a private residence in the college area, although we were not allowed into the back yard, I could see tables with beverages and food, supporters milling about listening to an out of view Kevin Faulconer telling of his ideas for the city and answering questions. As the sun was setting, we were hoping it would conclude soon so we had some good light for the shot. 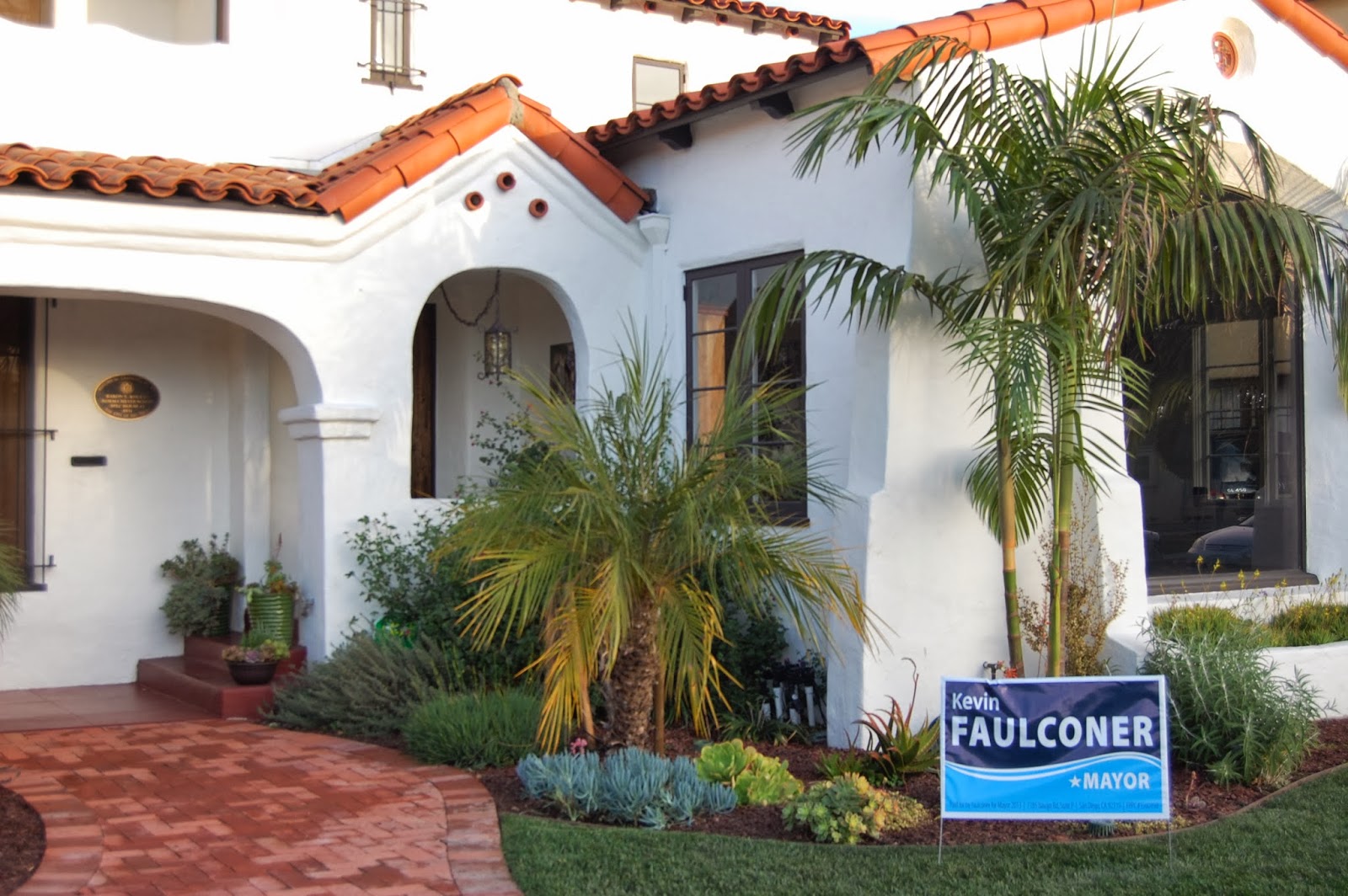 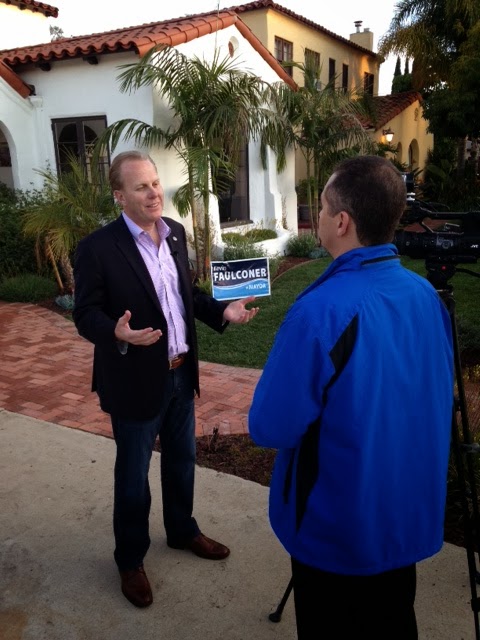 Sure enough, Kevin came to the front yard and greeted us, dressed looking slightly more relaxed than his opponent. we held the interview and I again got a photo with him. Kevin gave Gary his own City Councilman pin from his shirt and Gary can be seen wearing that same pin on Sunday night's SD 6 News and can be found in the news video below. 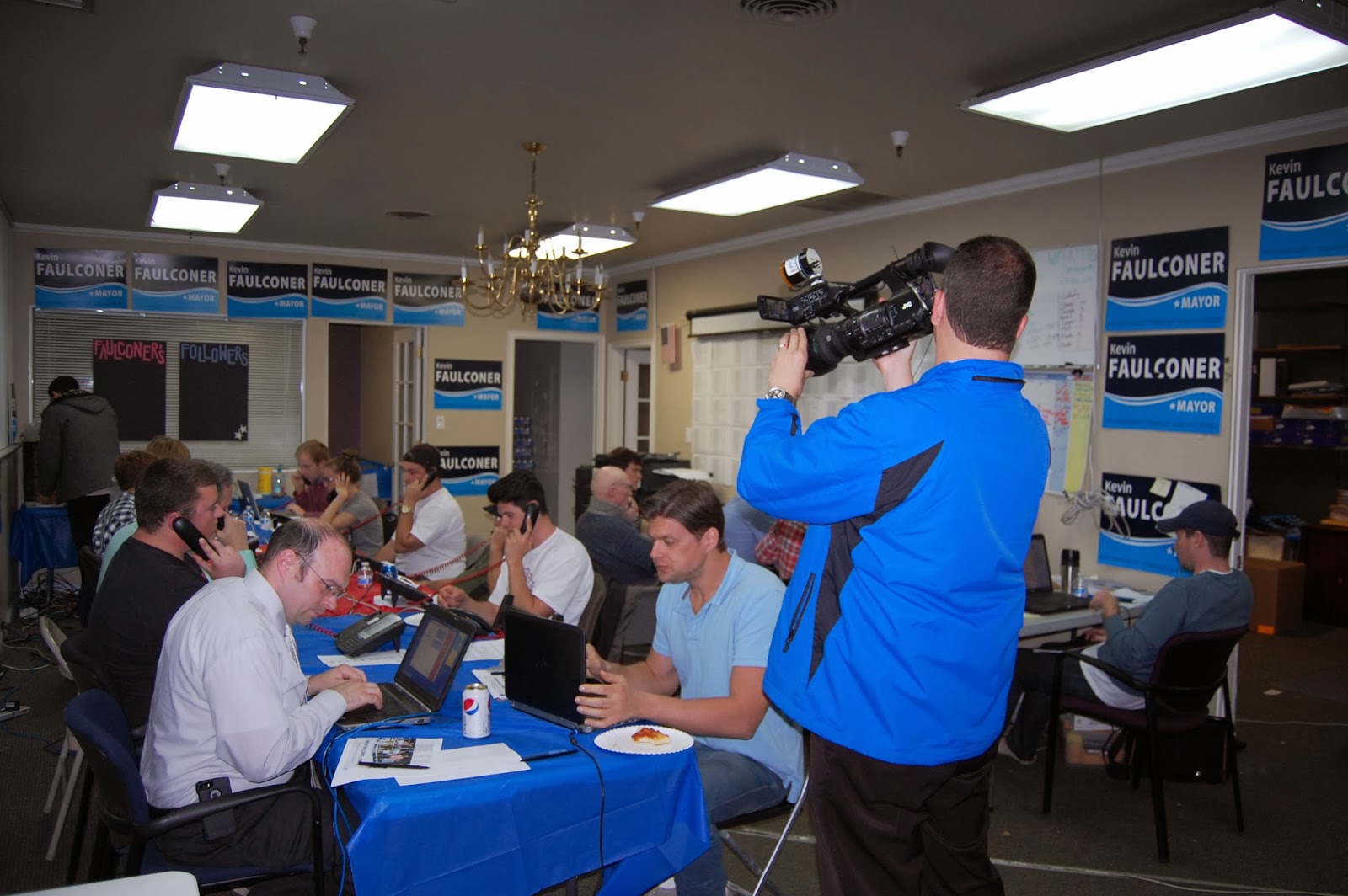 Two huge tables were jam packed with volunteers calling voters in a tucked away building in the Morena area, calls were flooding in as everyone had a phone in their hand. Gary shot some video and talked to a couple people and we were out of there.

Location #5: SD 6 TV Station
So, this is where the magic happens, writing, editing... Gary plants himself at a desk and pulls out all the audio and video footage he took today, on a memory stick! What used to be film can now fit into a pocket. He fires up his computer and begins putting the story together. First step, write the story. Gary writes it all, everything he will say in the 10PM broadcast and even what the anchors will say as they throw it to him. 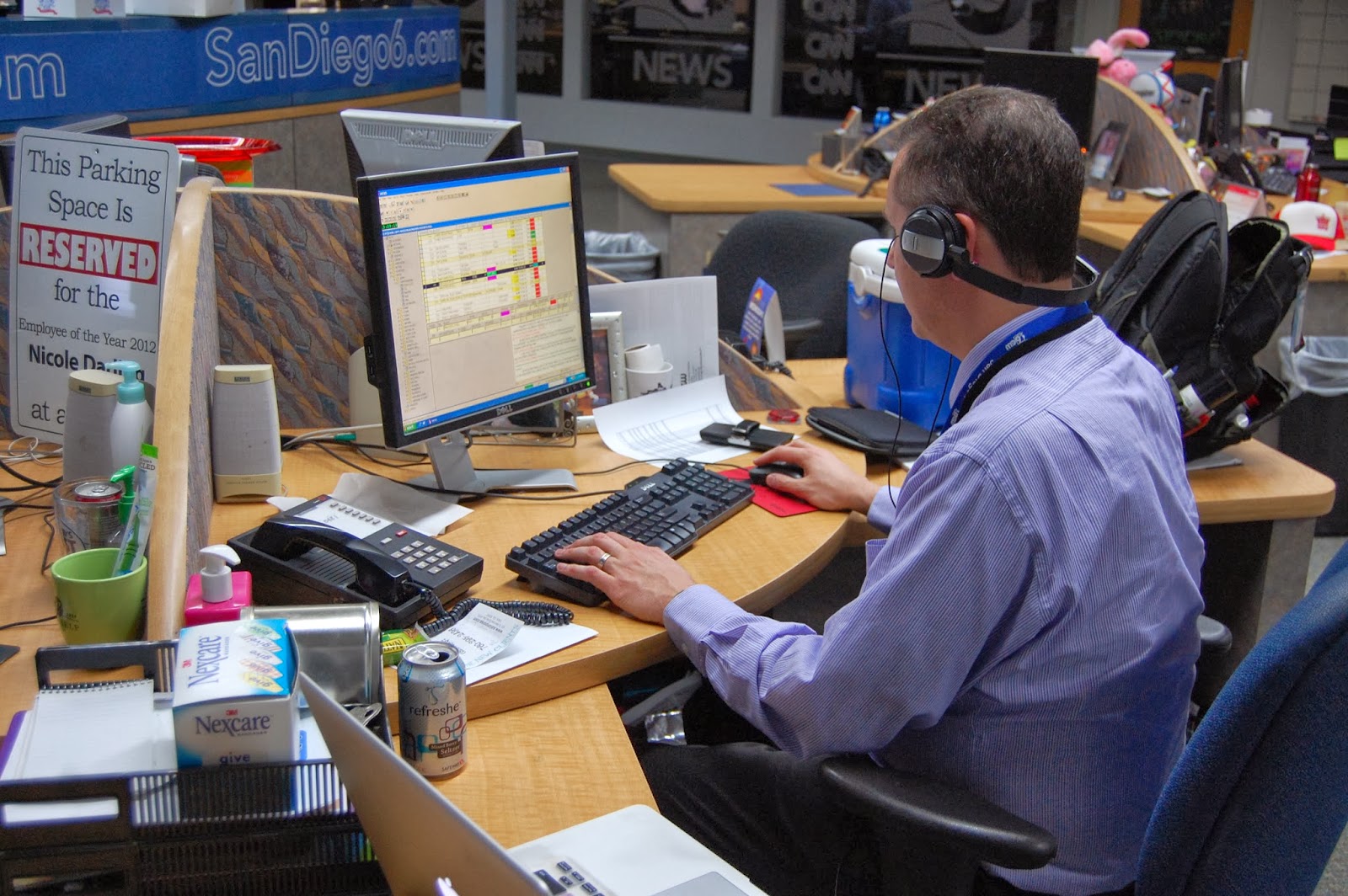 Next, Gary moves to a small studio where he performs audio tracking, the non-live audio portion of the telecast that can be heard as the viewer is watching footage. 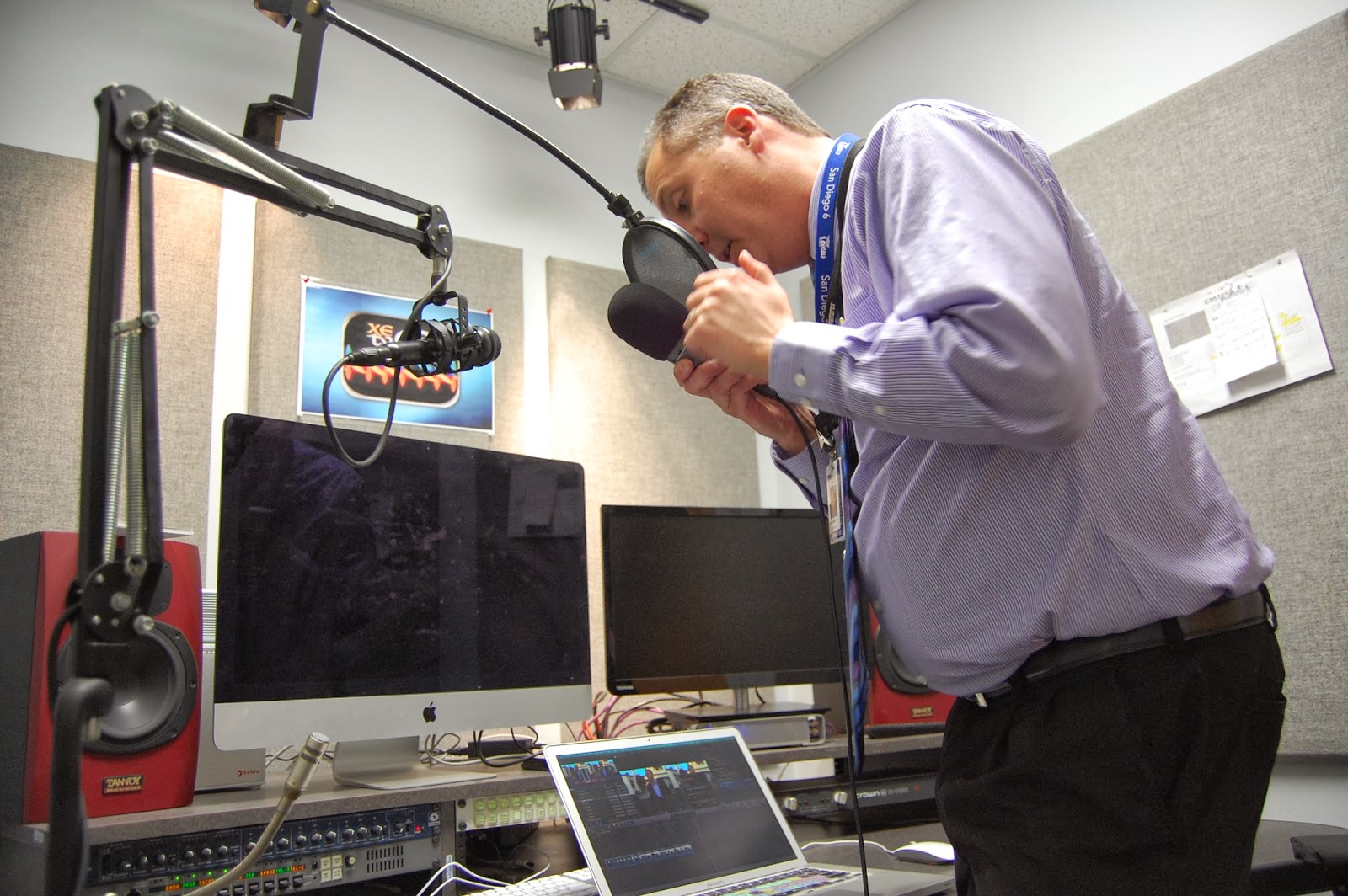 Video editing is the next step, assembling the puzzle of all the footage he has chosen for the telecast, adding his audio, the story is nearing completion. 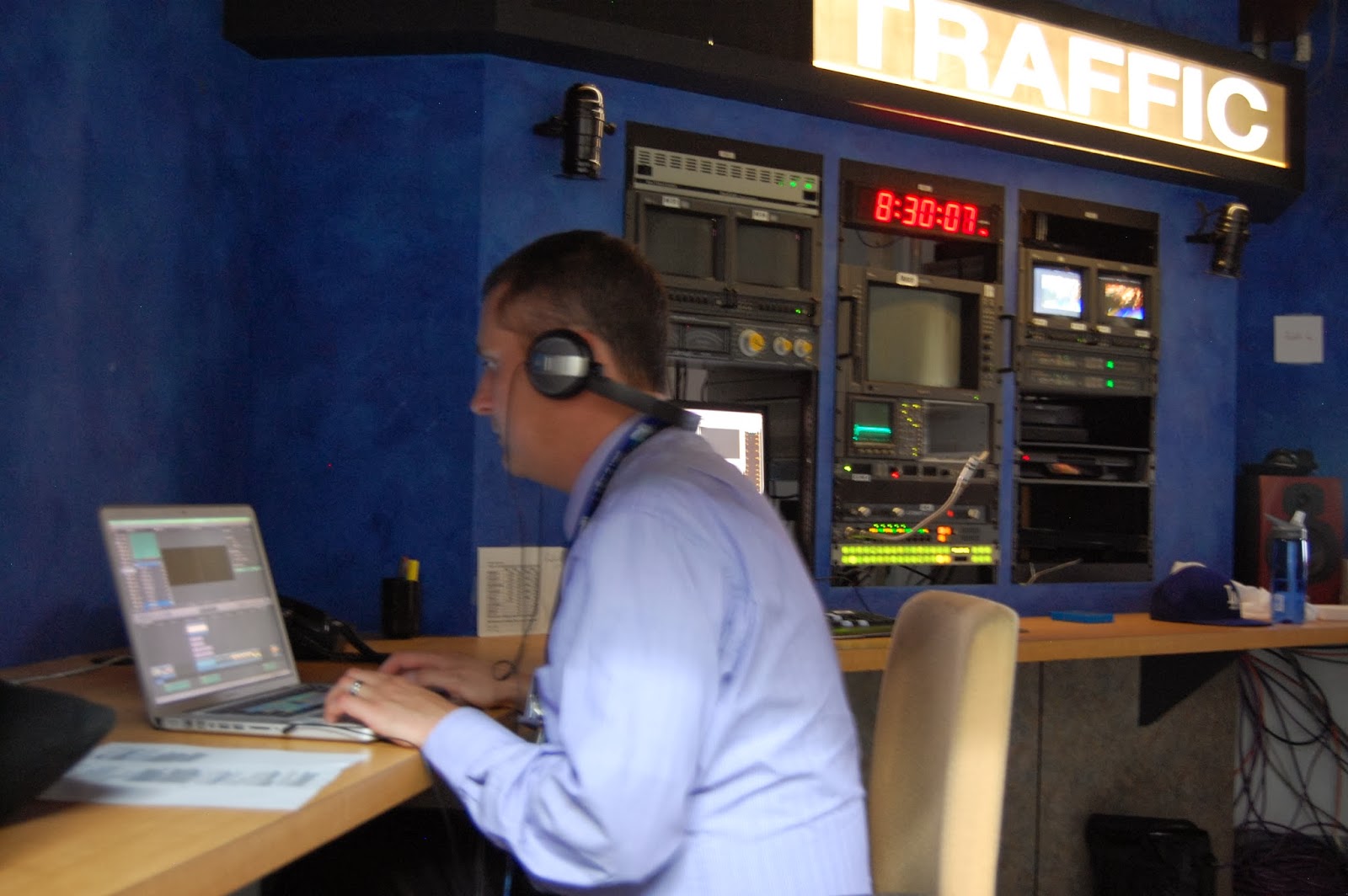 It's less than an hour til the newscast and Gary heads to make-up. Mostly to tone down the lights that shine so bright in the studio. 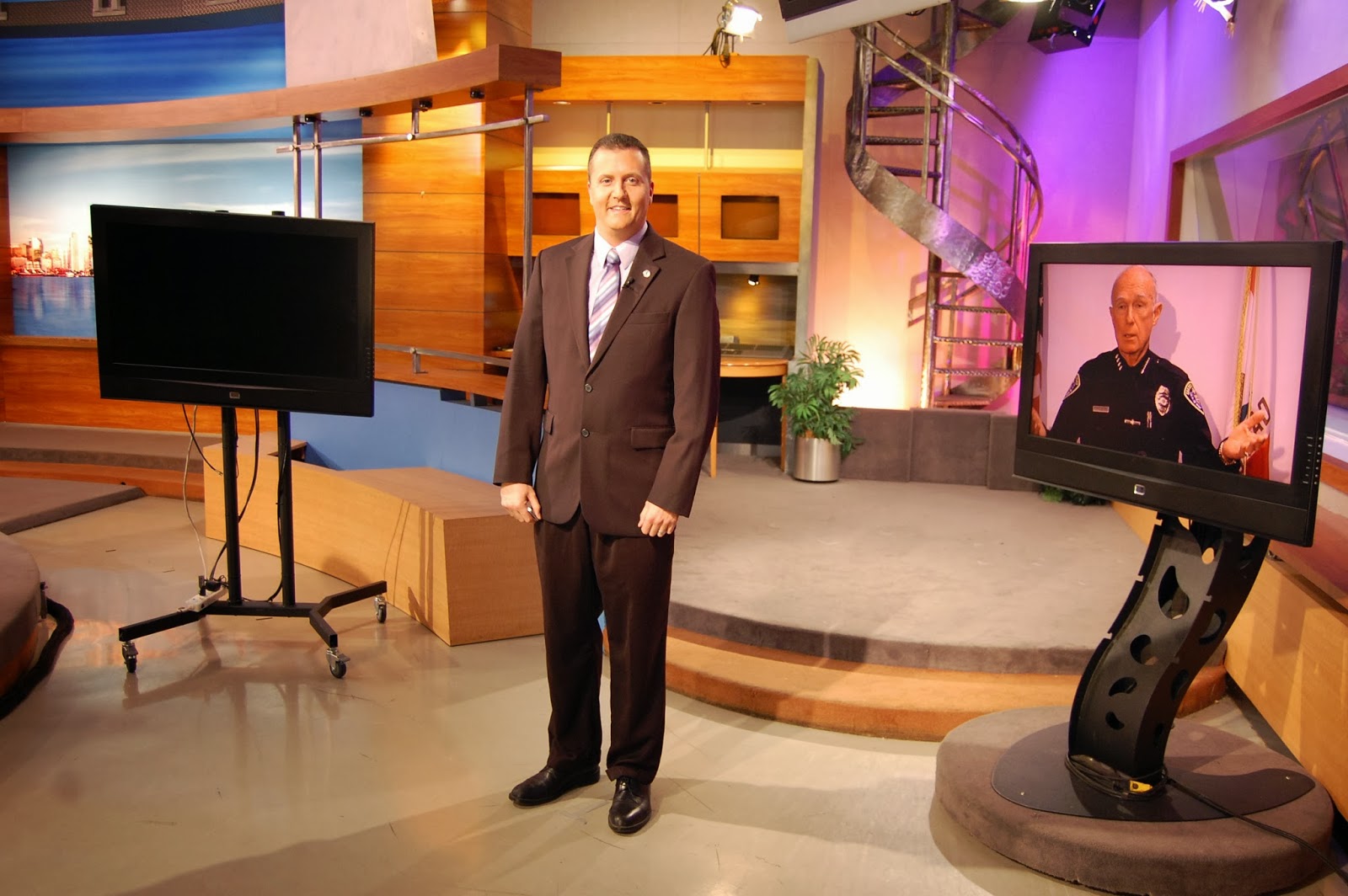 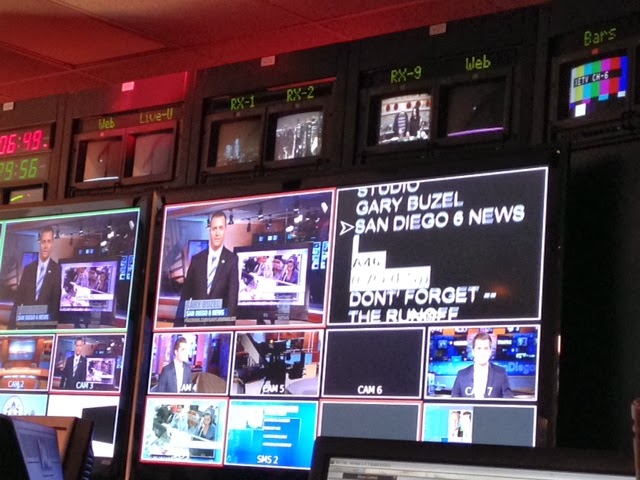 You can see Gary's story on the SD 6 page HERE

Thanks for letting me tag along, Gary. Very informative!