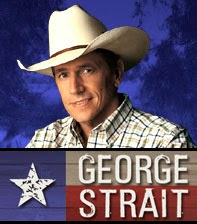 One of the biggest names in the history of Country Music, George Strait, is on his final tour entitled “The Cowboy Rides Away,” and will be making his San Diego finale at the Valley View Casino Center on January 31st with opener Miranda Lambert.  The show sold out the same day it went on sale.

GEORGE-FM will be San Diego’s best place to get tickets to the sold out show.  Listeners will have a chance to win tickets 6 times every weekday beginning January 6th.  There are also opportunities for listeners to win front row seats, flyaways to see George Strait in other markets, meet & greet passes, signed George Strait guitars, and more.

“George has been a large part of our over 50 years of bringing San Diego today's best country. George FM is our way to celebrate the final San Diego stop on the  final tour as the Cowboy Rides Away”, said Kevin Callahan Program Director for GEORGE-FM (KSON FM)

George Strait has sold over 70 million albums in the US and his certifications include 13 multi-platinum, 33 platinum, and 38 gold records.  He is the 12th best-selling album recording artist in US History, and has 60 #1 hits.  He was recently named the 2013 Country Music Association “Entertainer of the Year.”