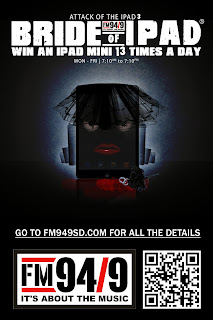 The Attack is coming back with FM 94/9’s Attack of the iPad 3: Bride of iPad

San Diego, CA – September 19, 2013 - FM 94/9 brings back iPad giveaways with Attack of the iPad 3: Bride of iPad! The attack is coming back AGAIN, and this time with a triple threat vengeance - 13 chances a day to win an iPad Mini!

Listeners also have additional chances to win by texting ATTACK to 61749 AND following FM 94/9 on all social media.

Trips include non-stop flights to and from San Diego to the different Alaska Airlines California destinations plus hotel stays and other fun activities!