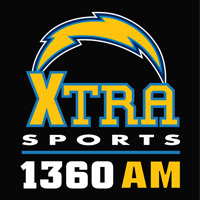 Starting in August, National Football League games, including the NFL playoffs and the Super Bowl, will be broadcast  this season on XTRA Sports 1360 , the home of the San Diego Chargers along with Rock 105.3 FM .
In addition to all the  pre-season and regular season Charger games  again this year, XTRA Sports 1360 listeners will now be able to hear the exclusive radio broadcasts of Monday Night Football, Thursday Night football and Sunday Night football along with key NFL games every weekend of the 2013-14 season.
"As one of the two radio simulcast partners with the San Diego Chargers, we are pleased to now be able to bring San Diego radio listeners the total package with the hottest brand in professional sports, the NFL," said Director of Sports Operations Brian Wilson.
XTRA Sports 1360 will also now be the home for select NCAA football and basketball games each week as well as the NCAA post-season basketball tournament including The Final Four plus live coverage of the major PGA golf tournaments including The Masters and and exclusive San Diego radio coverage of the 2014 Winter Olympics from Russia.