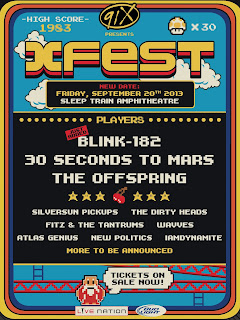 The concert date has been moved to Friday, September 20 to accommodate the addition, and will remain at Sleep Train Amphitheater.  Tickets are on-sale now, and any already purchased will be honored at the new date.

The rest of the X-Fest artist line-up remains mostly unchanged, with Silversun Pickups, the Dirty Heads, Fitz and the Tantrums, Wavves, Atlas Genius, IAmDynamite and New Politics rounding out the bill.

This will be the only live concert by Blink-182 in California this year.  “We thought that if we were gonna do something, let’s do it as close to my house as possible,” said Blink-182 front man Tom DeLonge.  “We’re very excited to announce that Blink-182 will be there with you.”

91X will also host a “91X-clusive” concert on Friday, May 17, the original X-Fest date, headlined by Jimmy Eat World with IAmDynamite as special guests at the House of Blues.

"When we started planning, we knew X-Fest had to be big this year in honor of 91X's 30th anniversary.  We wanted Blink-182 from day one, but it didn't seem to be working out, so we went ahead with a stellar line-up with Offspring and 30 Seconds to Mars," says 91X Program Director Christy Taylor.  "We never gave up, an opportunity appeared, and now we are thrilled to add San Diego's favorite band to X-Fest, and end the summer with the biggest concert of the year."

Thanks for tuning in to SanDiegoRadio
-Joe