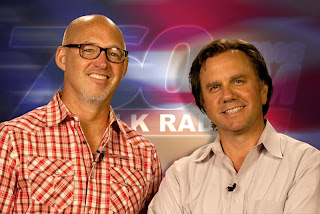 A twenty-year team, Jack and Joe have been known for years as one of California’s most popular and funny morning shows.  “We’re a couple of white men who occasionally get angry, but we’re not two angry white men,” says Getty.  Armstrong adds that the show is based in humor, “it’s hard to be too serious, for too long.”  Both men have families with kids, and they spend their time on the air equally talking about their lives, pop culture and occasionally politics.  Getty says that San Diegans can expect the pair to “skewer the news, and we’re quite proud of the fact that there are a lot of laughs on this show in any given hour”.

“Like any great radio morning show, Armstrong and Getty have that unique ability to not only connect with the listener but to become their companions,” says 760 KFMB Program Director Dave Sniff.  “They fit-in amazingly well among the great story-tellers that are part of 760 KFMB’s character and lineage.  They’re not so much a “talk show” as a “mock show”.

KFMB Radio’s Vice President and General Manager, Gina Landau says, “I’m so excited to welcome Jack & Joe to 760 KFMB.  What I’m going to love the most is the laughter, the fun and the smart way in which they deal with every day events.”