Recently I was invited by 101.5 KGB's Bromo Abromowitz to "Freedom Ranch", as Bromo describes it, an all men sanitarium.
We drove for about 40 minutes to reach the location, way out in East San Diego County. With snow on the ground, I saw their miniature golf course that was pretty much holes in the soil, no grass. I saw coffee cans strewn throughout the 200 acre compound and men walking about, smoking cigarettes or cigars.
I walked by one brightly lit room and could see men lined up to use the only phone available to them, they each have a time limit for the calls. I could see the dorms, laid out much like a hospital, long hallways with the rooms off to the side. I am told there are bunk beds in each room to allow multi-occupancy.
Many, many cats meander around as well, Bromo told me when he was there he was in charge of feeding them and no one but him was allowed to pick them up.
We filed into the meeting room (we were joined by Bromo's sister, Carrie and her kids) and took our seats in the back. As the meeting came to order Carrie was asked to hand Bromo his 4 year sobriety token and after the applause, they returned to their seats.
The group and its leaders ran through their customary meeting agenda and then Bromo was asked to come and tell his story. (as this is a 120 day program, they did not know him).
He was introduced as 'Dave', his real name, and told his story of how he was a marathon runner, got injured and was looking for a line of work. He mentioned he worked for Jeff and Jer originally until he met Dave Rickards and was given his shot at the big time, paid!
This is where the story got really interesting for me. As he told the story of working on the DSC, he revealed he was 'Bromo'..... sitting in the back, I had a great view of the crowd, I could see everyone sit up straight, whisper to each other and one guy even blurted out "No S#@%!"
Bromo had the crowd captivated and told stories they can all learn from, most importantly to have a plan after Freedom Ranch. Not one person seemed uninterested. He had them all captivated.
After his speech, he got a huge round of applause and tons of smiles, smiles from men who are there possibly by choice, possibly by force (the law). I was thinking to myself that many of these guys have kids at home and can't be there to put them to bed. I can't imagine the mindset they must have. To see them happy, tells me Bromo did his job with his message to them. As the room emptied, everyone walked by Bromo, shaking his hand, patting his back. Some had stories of their favorite bits from shows they heard.
From this writer, I can say I did not know what to expect going in. I was blown away! I really think that is a great program out there and Bromo did his part trying to inspire those men.

Great job, Bromo! Let's do this again next year for #5! 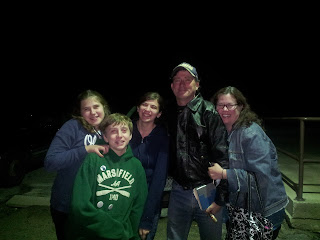